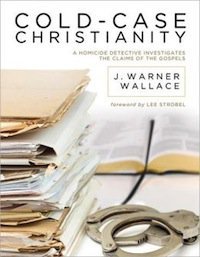 Buy from Amazon
The French have a phrase I love: plus ca change, plus c’est la meme chose. The more things change, the more they stay the same. While time marches on, and while the Christian faith marches on, the objections to it remain very much the same. Likewise, there are only so many arguments for the existence of God and the accuracy of the Bible. But even while the arguments remain much the same, it can be helpful to present them in fresh ways.

In the late 90’s Lee Strobel exploded onto the scene with The Case for Christ. His unique angle was approaching the Christian faith as a journalist. “Retracing his own spiritual journey from atheism to faith, Lee Strobel, former legal editor of the Chicago Tribune, cross-examines a dozen experts with doctorates from schools like Cambridge, Princeton, and Brandeis who are recognized authorities in their own fields. … Strobel’s tough, point-blank questions make this book read like a captivating, fast-paced novel. But it’s not fiction.” It was an effective book that sold millions of copies and one that continues to sell today.

J. Warner Wallace’s Cold-Case Christianity may well be The Case for Christ for a new generation. He has a unique approach of his own. Wallace is a cold-case homicide detective who dedicated much of his career to solving homicides that had been left unsolved many years before. He would re-open old investigations, take a fresh look at the evidence, interview the witnesses and suspects, and see if he could bring closure to old crimes.

Wallace was at one time an atheist who had been challenged with the claims of the gospels. As he began to read the Bible and consider its claims, he realized that Christianity was much like the cases he solved as a detective. He saw that there was evidence and there were eyewitnesses and records that could be weighed and considered. He used the skills and disciplines he had learned as a detective and brought them to bear on the Bible and on the Christian faith. He came to see that the case for Christianity was as strong as any case he would bring before a judge.

In Cold-Case Christianity he approaches the claims of the gospels as a detective. Over ten chapters he shares ten important principles that every aspiring detective needs to master. Some of these are skills and some are attitudes: learning to be objective, learning how to infer, understanding the importance of circumstantial evidence, testing witnesses, properly handling evidence, being prepared to face an attack from a defense attorney, and so on. What is applicable to a detective trying to put a murderer behind bars is surprisingly applicable to anyone investigating Christian claims. After he shares those principles, he puts them to use as he opens up an investigation. Were the gospel writers there? Were they corroborated? Were they accurate? Were they biased? In each case he handles the objections brought by those who reject the Christian claims, often focusing on the claims of men like Bart Ehrman who is committed to destroying confidence in the Bible.

This book is written for two different audiences. It is for skeptics who reject the Bible and who reject the claims of the Christian faith. “My experiences and insights might help you to assess the gospel writers in a new light. … The answers are available; you don’t have to turn off your brain to be a believer. Yes, it is possible to become a Christian because of the evidence rather than in spite of the evidence. Many of us have done just that.” I found his arguments powerful and convincing, but, of course, I read the book as a Christian rather than a skeptic. But he convinced me once again that the claims of the gospels are not only true, but verifiable and believable.

The book is also for Christians. “My experiences might provide you with a few tools that can help you defend your faith in a more vigorous and informed way. … I want you to become an informed Christian, to worship God with your mind and to prepare yourself as a Christian case maker.” Wallace wants Christians to believe the claims of the gospel, but to believe them because they have investigated them and have weighed the evidence.