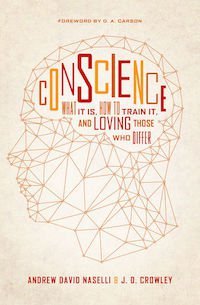 Sometimes I get well into a new book and suddenly find myself wondering, “Why on earth have I never read a book on this topic before?” This was exactly the case with Conscience: What It Is, How to Train It, and Loving Those Who Differ by Andy Naselli and J.D. Crowley. How is it that I’ve read so many hundreds of books, but have never read one on conscience? Whatever the answer, I am very thankful that I read this one. I benefitted tremendously from doing so.

Is this subject worthy of a whole book (granted that it is a fairly short one)? Yes, by my judgment. Naselli and Crowley say

Our modest but potentially life-changing goal is to put conscience back on your daily radar, to show from Scripture what God intended and did not intend conscience to do, and to explain how your conscience works, how to care for it, and how not to damage it. We’ll show you how awareness of conscience increases church unity and strengthens evangelism and missions. We’ll talk about how to get along with others whose consciences enable them to hold different personal standards. And we’ll give you principles for how to calibrate your conscience to better conform to God’s will. We’ll even include a chapter on how missionaries and other cross-cultural servants can avoid pitfalls that arise from misunderstandings over differing consciences across cultures.

What is the conscience anyway? In short, “The conscience is your consciousness of what you believe is right and wrong. It’s basically your moral consciousness or your moral awareness turned back on yourself.” Conscience is a God-given capacity to make moral judgments in areas in which we do not have clear revelation from God or where we lack the spiritual maturity to properly understand his revelation. Conscience is a kind of early-warning or alarm system that alerts us when we are transgressing God’s will. “Your conscience is a gift. God gave it to you for your good. And when it’s condemning you, you need to discern why and then respond.” A look at the Bible passages on conscience shows two principles that take prominence: God is the only Lord of conscience and you should always obey conscience.

Of course the conscience is not infallible, so it needs calibration. If you are required to heed conscience, then of course you want your conscience to be as accurate and reliable as possible. “Don’t sin against your conscience. Listen to your conscience. Cultivate a good conscience.” A whole chapter provides wisdom on discerning the reliability of conscience and calibrating it according to the clear revelation of God. A series of examples helpfully illustrates how you might do this when it comes to allowing certain instruments in worship, listening to particular styles of music, celebrating Halloween, and the like. A list highlights areas where your conscience may need greater conviction and calibration.

One of the tricky elements of conscience is that it is related to our spiritual maturity and to the depth of our understanding of Scripture. This being the case, no two consciences will be perfectly alike even while both Christians are expected to heed their own conscience. For this reason, one important chapter offers wisdom on relating to fellow Christians when your consciences disagree. The authors offer twelve principles that can guide Christians as they pursue unity and joy, especially in local church contexts.

Perhaps the most challenging section is the one that looks at the relationship of conscience to culture—an important topic for me, living and ministering as I do in a very multi-cultural context. Crowley speaks with authority here, having spent much of his life as a missionary in Asia. He tells how certain actions that are unconscionable in America are completely acceptable in Asia (and, of course, vice versa). His experience of two very different cultures helps illustrate the subjectivity of conscience and also the importance of emphasizing it out of love for others and out of a desire to further mission among them. “Wise missionaries study both their own culture and the target culture to find … wholesome and unwholesome aspects so that they and their converts can embrace the good and turn away from the evil.” The authors dwell on Christian liberty to show that the true liberty of the gospel is not the liberty to do whatever you want, even with a clean conscience, but the freedom to discipline yourself in flexibility for the sake of love and the furtherance of the gospel. A closing prayer wonderfully brings the book’s principles into a plea to God for a clean, pure, tender conscience.

Conscience is an excellent book that covers its topic through skilled, powerful, straightforward teaching. The authors stay deeply grounded in Scripture without swerving into the dangerous ground of binding the reader’s conscience. I’m very glad I read it and am convinced it has equipped me to better honor and represent God in this world. I believe that if you read it, you will say the same.