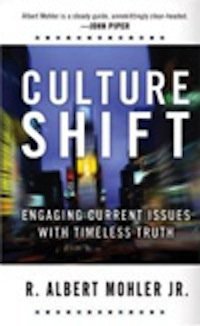 Buy from Amazon Buy from WTS Bookstore
The most surprising thing about Culture Shift is that it is Dr. Albert Mohler’s first book. Though he has been a contributor to edited volumes and though he is a very prolific writer, this book represents his first solo effort. Published by Multnomah and set to his store shelves on January 15, Culture Shift is a book that engages current issues with Scripture’s timeless truths. It teaches Christians how they should think about such issues. Dr. Mohler is one of the church’s foremost cultural commentators and is well-qualified to write such a book. Through his blog, through his radio program and through his media appearances, he has proven that he can combine theological acumen with spiritual discernment as he addresses the issues that affect the church in our culture.

In the first four chapters, Mohler lays some important groundwork. He first addresses Christian faith and politics by using the case St. Augustine made in The City of God. Humanity, he says, is confronted by two cities—the City of God and the City of Man. While the City of God is eternal, the City of Man is only fleeting and temporal. However, it’s passing nature does not mean that the city is entirely unimportant. Christians are called to responsibility in both cities. “Even as we know that our ultimate citizenship is in heaven, and even as we set our sights on the glory of the City of God, we must work for good, justice, and righteousness in the City of Man.” As we seek to live between these two cities, Christians tend to swing between extremes, sometimes giving undue attention to one or sometimes looking too singularly to the other. This book seeks to help Christians understand how they can live in this tension. Having addressed the importance of engaging the City of Man, Mohler moves two three secular arguments, three secular myths and then five theses related to Christian morality and public law.

Having laid the groundwork, he turns to particular areas where Christian truth can speak to cultural issues. He looks at a Christian challenge to the culture of offendedness, the Supreme Court’s rulings on religion, terrorism, torture and public schooling. He looks to the God gene, American immaturity, abortion, natural disasters and other contemporary issues. In each case he addresses these topics by looking to the Bible’s timeless truths to show how God informs and directs our engagement with the culture. In each case he handles the issue with grace but also with truth. Those who are familiar with Mohler’s blog will be familiar with the way he sets about engaging with issues and will even recognize many of these essays as most of them began their lives in one form or another at his blog.

In his introduction to the book Dr. Mohler writes “We must first understand our culture and its challenges because we are to be faithful followers of Christ and faithful witnesses to the gospel. We are called to faithfulness, and faithfulness requires that we be ready to think as Christians when confronted with the crucial issues of the day. This is all rooted in our love of God.” An understanding of culture, then, is an evangelistic necessity if we are going to impact this culture with the good news of the gospel. The essays in this book will help equip Christians to understand the culture in which we find ourselves so that we can reach into it and engage with it for the glory of God. Dr. Mohler’s first book is an excellent one and I pray it is only the first of many.