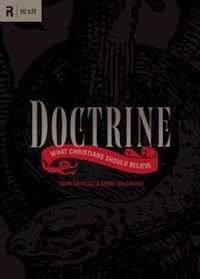 Buy from Amazon Buy from WTS Bookstore
Mark Driscoll must be a busy guy. As if his ministry at Mars Hill isn’t enough to keep him busy every hour of the day, he has also written a long line of books, the most recent of which is titled simply Doctrine: What Christians Should Believe. Like several of his previous volumes, this one is co-authored with his friend and theological mentor Gerry Breshears. While using the term “systematic theology” may not be entirely helpful in describing this book, it at least gives an idea of its contents. Doctrine exists to provide an overview of what Christians ought to believe.

As theological tomes go, this one is particularly interesting, particularly effective, in its structure. Each chapter introduces a topic through a single word and then shows how that topic is really all about God. The first chapter is “Trinity: God Is” while the second is “Revelation: God Speaks.” That sets that pattern that continues through each of the book’s thirteen chapters (the last of which, not surprisingly, is “Kingdom: God Reigns.” This beautifully takes doctrine out of the abstract and applies it directly to God himself. It takes a noun and matches it with a verb, showing for example how the doctrine of the church is not about us, but about God, about his desire to send his Word into all the world (the chapter is titled “Church: God Sends”).

Also effective is the pattern of asking questions through each of the chapters’ subheadings. So as we begin to read the chapter titled “Fall: God Judges” we have subheadings that ask questions like “What Is the Fall?,” “What Is Sin” and “Where Did Sin Originate?” In each case the topics are explained in a way that is clear and concise but in way that does not depend on obscure theological terms. It is a very useful structure and one that differentiates it from so many other similar books, most of which are systematic theologies. It sets it apart in a very good way.

So much for the book’s structure. What matters far more, in the end analysis, is the book’s content. And here Driscoll and Breshears have presented a lengthy look at Christian doctrine that is accurate, biblical and even worshipful.

Endorsed by the likes of Carl Trueman, Wayne Grudem and John Frame, each prominent theologians in their own right, Doctrine aptly defends the historic doctrines of the faith. That is not to say that each of these theologians would necessarily agree with everything the authors write. There will be clear unity on the foundations of the faith but some disagreement on the finer points of doctrine. Areas where some readers will disagree will include the authors’ understanding of Creation (they come down on the side of the Gap Theory), their view of unlimited limited atonement, their view of covenant and baptism (they are firmly baptistic) and their view of the continuation of some kind of special revelation and miraculous gifts. Yet while I myself disagree with them on several of the issues (actually, I think I disagree with them to varying degrees on all of the issues I listed here) I am glad they were willing to not just list the options but also to take a stand. That increases rather than diminishes the value of the book.

Particularly effective are the sections discussing the incarnation as the model for the church’s mission and their defense of the important of celebrating and joining with the local church. Throughout they consistently do a superb job of showing why all this theology matters and how it must work itself out in the life of the Christian. Again, this is not abstract theology, but theology in motion, theology in practice.

I’ve heard it said that Mark Driscoll put far more work into this book than any of his others. I wouldn’t be surprised to learn that he put more effort into this book than he put into the rest of them combined. Doctrine: What Christians Should Believe is probably his best book so far (and I think I’ve read just about all of them). Though it may not be the most exciting to many readers, at least on the face of it, its content is biblical and its way of presenting that content superb. It is a good book to read through and then to keep on-hand for reference purposes.