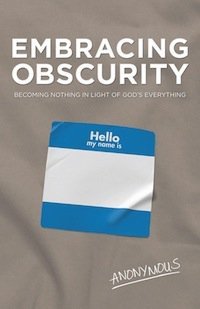 Buy from Amazon Buy from WTS Bookstore
I occasionally write under a pseudonym. There are some things I feel like I can say, or maybe even ought to say, that wouldn’t be wise to contribute under my own name. And so there have been a handful of times over the years that I’ve written under a pseudonym. There are several complications that come with writing under a pen name, chief among them that it is difficult to interact with people who appreciate and respond to what I’ve written. Unless I want to create an entire identity for this character, complete with email address and Facebook profile, I have no capacity to respond to those who have questions or concerns.

There is another issue that, sadly, tends to bother me more. A couple of things I have written under this other name have been well-received and I have found it surprisingly difficult to allow the accolades to go to a non-existent person. I’ve got pride problems, I guess, and want some of that recognition for myself. In its fullest form, I can see that I almost feel like it’s a waste to write something clever or something helpful that doesn’t, in the end, elevate my name. That sounds pathetic as I write it, but I think it’s true, at least on one level.

The author of the new book Embracing Obscurity spotted this same pride problem in his own life and responded by writing an entire book as simply Anonymous. In the book’s opening pages he admits to fantasies in which he is outed and receives the praise that he desires, at least on one level. And yet he has done all he can to shield his own identity, thus avoiding the ridiculous problem of receiving accolades, of receiving a wider platform, for a book that deals with obscurity. Like the panel of well-known leaders who discussed celebrityism at this year’s Together for the Gospel event, even discussing the subject carries with it a certain level of irony.

At a time of Christian celebrityism, Embracing Obscurity is a call to “become nothing in the light of God’s everything.” In a culture where so many people fear being underrated, where so many people feel they deserve recognition, this is just one of what I hope will be several calls to be willing–eager even–to be unrecognized and insignificant in the eyes of men. Though I trust this book is not the final word on the matter, I consider it a helpful opening salvo in the battle against a culture of Christian celebrity.

Anonymous begins with a reasoned call for obscurity simply in the light of being just one of seven billion people on the earth. Statistically, each of us is insignificant. But then we know that as beings created by God, created in the image of God, we could scarcely have more significance. So Anonymous draws our minds to the gospel where we see that our deepest significance is not found in our status or celebrity, but in being God’s image bearers. Not only that, but through the cross we are released to live what may seem insignificant lives so that we draw attention to Christ. Each of us, through the cross, can celebrate obscurity when Christ is elevated. Only in light of what Christ has done are we able to find joy in obscurity. This is the central message of the book and the most important takeaway.

Embracing Obscurity is a noble and well-timed attempt to advance the conversation about where we will find our identity and how we will understand Christian celebrity. It is well worth reading and well worth pondering.