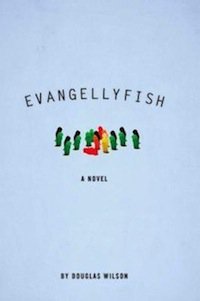 Buy from Amazon
Is it satire or is it parody? Whatever it is, Douglas Wilson’s Evangellyfish must be unique in the Christian market. This is a book, a novel, first serialized online but now re-edited and formally published, that provides a scathing indictment of evangelicalism. It does it well.

Of course if you know evangelicalism you know that it isn’t all that difficult to satirize. What you dream up as a hilarious punchline is the kind of thing you’ll see next month on the shelves of the local Christian bookstore or in the advertisements for the nearby megachurch. It makes me wonder, why haven’t more people written books like this?

Evangellyfish revolves around Chad Lester, a massively successful megachurch pastor who makes Bill Clinton look positively chaste. He is loved and adored by his legions of devoted fans and by the millions who read his hopelessly shallow books. He drives a flashy sports car and has a massive home and a girlfriends all across the city. He suddenly finds himself embroiled in a sex scandal which is shocking only because this time his accuser is a man.

Laboring near Lester is John Mitchell, also a pastor, but of a small, conservative church. He has no real following and drives an old, beat-up car that is shedding parts. Though he may be a little bit of a legalist at times, he is a genuine and caring pastor who toils in obscurity. He is representative of any number of really normal pastors. The lives of these two men, and so many others, are thrown together as the details of the scandal unfold and explode. As is the case with such scandals, the facts mean nothing when compared to the lurid details.

Allow me to make a few observations about the book.

First, I found that the book was more about “them” than “us.” What I mean is that Wilson appears to be satirizing the run-of-the-mill, cliched, program-driven megachurch. At least that is how I read it. I enjoyed the story, but didn’t feel like it really sucker-punched me the way I had expected it to. I wanted Wilson to aim at me as well because I’m pretty sure there is a lot of foolishness that I am blind to as well. There were a few of those digs, but not as many was I would have liked.

Second, I was surprised, though not particularly offended, at Wilson’s use of language. He quite often uses the kinds of words that tend to be foreign to Christian books (things like “What the hell”). He also uses words related to sex and sexuality that are, well, a bit crude. He does all of this in the name of realism—this is how people actually speak. I did not find it offensive as much as surprising. Are Christians allowed to be realistic? Can we write books that include dialog that sounds the way real people actually speak?

Third, I found that some of the strongest parts of the book are the ones that describe John’s marriage to Cindi. Wilson offers little glimpses into the secret world that exists between husband and wife. These were warm and sweet and true, even if they were more about atmosphere than about story. Of all the books I’ve read, I can’t remember any that have celebrated that little world. I loved it.

Fourth, Wilson gaffed in having John Mitchell preaching 2 Corinthians; no one has ever preached 2 Corinthians because in order to do that, you’ve first got to preach 1 Corinthians, and by the time you get through that book, you are ready to move on to something else. Or that’s my theory anyway. (Seriously—take a look at the number of commentaries on 1 Corinthians compared to those on 2 Corinthians.)

Fifth, well, I really enjoyed the book. Evangelicalism is ripe for satire and Wilson does it well. He is often insightful, often hilarious, and always enjoyable. Here is a lengthy quote that is representative of what you’ll find:

Johnny Quinn sat in his cubicle in the Wildlife4YouthRampage offices, but was not fully sure that was the right name. They kept changing the name on the brochures so it was hard to know from day to day what the ministry was called. Uncertainty was part of the appeal. That was just one problem with ministering to the youth of today—riding the wave of cool and contemporary youth ministry was like surfing the big ones, and with one false move, there you were with sand in your trunks.

Johnny was rubbing the back of his neck. He was one of seven assistants to the main youth minister, who was off doing stuff and never around anymore, and Johnny had been told many times that he had a promising future ahead of him in this “most important work.” He had short blond hair, and a diamond stud earring—big enough to give him street cred, so necessary in youth work these days, and yet the earring was small enough to not worry the small handful of people at Camel Creek who might possibly have a problem with it. And at one point in the church’s history there might have been a handful of people disturbed by this kind of thing in the church, but they had all died and gone to heaven quite a number of years before. Frankly, none of these people cared about it now, apparently having better things to think about. But Johnny still agonized over such things—what size earring would the apostle Paul have worn if his mission had been to the skateboarding and pants-droopy youth of today? Not an easy question to answer.

Every month or so the stress of youth ministry—dealing with the kids and all their issues—would get to Johnny, and so he would head on over to Brandy’s apartment to have her give him a neck rub, followed by her specialty back rub. But somehow her giving him a back rub always turned into him giving her a front rub, and then they would fall again.

That was actually how their relationship started, which is to say, through those darn back rubs. It was her senior year in high school and she was in Johnny’s youth group, which was a combination Bible study and daisy chain back rub circle. At the end of that year they all had a good working knowledge of the gospel of Mark, and significantly improved blood flow in the delts. Brandy gave him a few back rubs back then that brought them perilously close to the edge, but honestly, there was no front rubbing until after she graduated and got her job at KING radio. That meant that when they finally followed the manner of all the earth, they were not violating the professional standards of youth ministry, but rather simply the seventh item on an ancient list which was from the Old Testament anyway.

I hesitate to say too much more about the book lest I begin to give away too many details. Then again, the story isn’t the point; it’s the satire that’s at the heart of it all. Wilson takes aim at some of the worst of evangelicalism and savages it. I’m all for that.