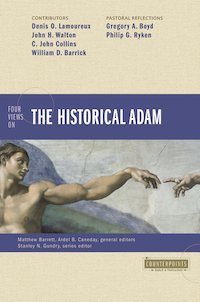 Few questions are more pressing among Evangelicals today than the time and the manner in which God created the world and all life within it. Did he create the world in six literal days or did he create the world over millions of years? Was human life a spontaneous creation of God or did it evolve from a primordial ancestor? The controversy is raging today with no clear end in sight.

Following closely in the wake of the discussion about creation is the controversy over whether or not Adam was a historical figure. Was Adam a real man who actually existed? Or is it possible that he is merely a figure or an archetype meant to teach us about God and about ourselves? Zondervan’s “Counterpoints: Bible and Theology” series has taken on this issue by inviting four scholars to defend their own view while interacting with others in Four Views on the Historical Adam.

Denis Lamoureux begins by insisting there was no historical Adam and he bases this on his evolutionary creation view. He believes that “the Father, Son, and Holy Spirit created the universe and life, including humans, through an ordained, sustained, and intelligent design-reflecting natural process.” He rejects the assumption that the biblical authors had any advanced knowledge of scientific facts and, therefore, says that they wrote the truth as they understood it, even though the scientific facts have since been proven wrong. This mean’s that Paul’s understanding that Adam was a historical figure is rooted in this faulty, ancient biology. Science has since proven the impossibility of one man being the father of all humanity.

John Walton follows with his conviction that while Adam and Eve are real and historical figures, “the biblical text is more interested in them as archetypal figures who represent all of humanity” than as real people. Therefore Genesis 2 does not mean to teach that Adam was actually formed from the dust of the ground and that Eve was actually formed from Adam, but that all of humanity is formed from dust and that we are all gendered halves. “If this is true, Genesis 2 is not making claims about biological origins of humanity, and therefore the Bible should be not viewed as offering competing claims against science about human origins.” In this view Adam and Eve may or may not be the first humans and they may or may not be the parents of the human race.

The third essay comes from C. John Collins who holds to an old-earth perspective on creation. He argues that “the best way to account for the biblical presentation of human life is to understand that Adam and Eve were both real persons at the headwaters of humankind.” Here he looks well beyond the opening chapters of Genesis and examines the larger biblical storyline. He argues as well that “the nature of the biblical material should keep us from being too literalistic in our reading of Adam and Eve, leading room for an Earth that is not young, but that the biblical material along with good critical thinking provides certain freedoms and limitations for connecting the Bible’s creation account to a scientific and historical account of human origins.”

The final essay comes from William Barrick. He holds that Adam is the originating head of the whole human race and believes that protecting Adam’s historicity is absolutely crucial if we are to maintain any number of doctrines including the inspiration and inerrancy of the Bible. He rejects evolutionary science and teaches that God created the world in six consecutive, literal days. He also closely links the first Adam with Christ, the second Adam who came to undo the first Adam’s sin and its tragic results. “Evangelicals should uphold and defend the uniqueness of the Genesis record and give it priority over ancient Near Eastern materials and modern science in all discussions of primeval history and the historicity of Adam and Eve.”

Following the format of the series, the authors are each given a few pages to respond to one another before the author of the essay provides one brief rejoinder. It is an effective format, even if a bit onerous at times.

I found Lamoureux’s view biblically indefensible and woefully inadequate as he assaults the biblical text and the biblical storyline. He insists that his view can and should fall well within the Evangelical mainstream, but, as the other authors point out, he utterly undermines any confidence in Scripture. Walton’s view was, in my assessment, far too difficult, depending on explaining away so much of what the Bible makes clear. It was as if he was constantly saying, “I know the Bible says this, but it actually means this other thing.” His view, too, threatens to undermine our confidence in the biblical text and depends far too heavily on other literature from the ancient near east.

Collins’ responses to the other authors, as well as his own essay, marked him as my favorite of the four authors, even though I cannot agree with his old-earth view. He carefully defends the authority of the biblical text and shows what we stand to lose if we allow a form of theistic evolution to explain Adam’s existence. William Barrick aptly defends the young-earth creation view and shows the danger we put ourselves in if we reject a historical Adam and if we allow ourselves to push too hard against the constraints of Scripture. I would have preferred a more winsome tone in his essay and in his responses to the other authors.

The book concludes with two pastoral reflections, one from Greg Boyd and one from Philip Ryken. Boyd’s could be passed over without any great loss, but in my view, Ryken’s essay is the best part of the whole book; his essay alone is worth the cost of the book and I hope it appears in the future in another medium, lest it be lost and forgotten here. He titles his essay, “We Cannot Understand the World or Our Faith Without a Real, Historical Adam” and goes on to prove it. He shows how many of the most important Christian doctrines stand or fall on the historicity of Adam. He shows that the historical Adam gives confidence that the Bible is the Word of God, explains humanity’s sinful nature, accounts for the presence of evil in the world, clarifies the biblical position on sexual identity and family relationships, assures us that we are justified before God, advances the missionary work of the church, and secures our hope in the resurrection of the body and the life everlasting. It is a powerful essay that reacts against the non-historical Adam and the archetypal view while showing that whatever we believe about the time involved in creation, we absolutely must affirm that Adam was a real, historical figure whose fall and redemption is intricately connected to our own.

While the writing in this book is dense at times, and while it may require circling back a few times, readers will be rewarded with a firm grounding in an important discussion and a heightened sense of just how much is at stake. Best of all, I trust they will come to see just how dangerous it is to reject the simple fact that Adam was a real man who really was spontaneously created by God and who really is the father of us all. Our our hope, our salvation, and the health of the future church, depend upon it.