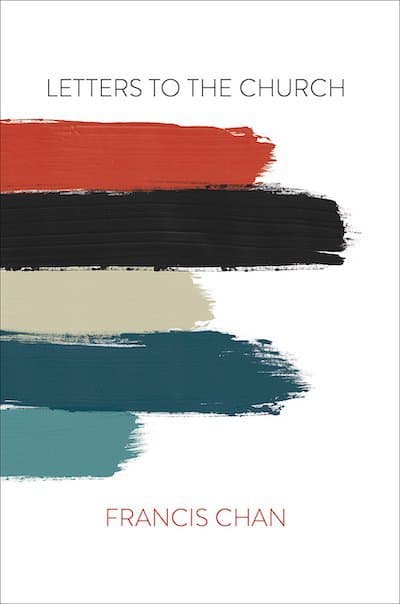 Francis Chan has had an interesting journey. Just a few years ago he was pastoring the growing and thriving Cornerstone Community Church in Simi Valley, California. He was in demand as a speaker and received invitations to preach at the biggest churches and conferences. Then, rather suddenly, he announced he would be leaving his church. After a number of months overseas with his family, he returned to California to begin a church planting movement in San Francisco. He is currently a pastor of the We Are Church house church network that is spreading through Northern California.

Chan has written a number of popular books over the years and his most recent is set to be influential, especially among younger Christians. It is called Letters to the Church and functions as a kind of manifesto about a better way to do church. The story begins back in his Cornerstone days. Though Chan had achieved what so many pastors only dream of, he still wasn’t satisfied. “Over the years, I couldn’t shake the feeling that something was still missing. It wasn’t a problem with the church members or with the staff God brought to help me lead. We were successful in staying on target with the goals that had set the DNA of the church. But something was off.”

He began to question whether his definition of a church matched the New Testament’s. He was especially concerned about the lack of love he saw in his congregation, and came to the conclusion there was nothing supernatural about the way the people loved one another. It concerned him as well that only a few obviously used their spiritual gifts to serve their brothers and sisters week by week. He grew in his conviction that his church might actually be a cult of personality built upon him. He looked for answers and tried to lead his church in healthier directions, but was unsatisfied with the results. In the end, he felt he had to leave his church. After resigning, he spent a few months traveling through India, Thailand, and China with his family and it was in these lands that he saw the elements missing from his own church experience.

I saw such fearless dedication and boldness from the pastors in India, who had renounced everything for the lord. We witnessed the simplicity of the lifestyles in rural Thailand and the joy of the men and women who faithfully served widows and orphans day in and day out. In China I saw the gospel spreading like wildfire as people endured and even rejoice in persecution.

He was tempted to remain in the East, but became convicted God was telling him to return to America and to apply the lessons he had learned there. “I really believe He was telling me to go back to the States and plant churches. While overseas, I had gotten to see a glimpse of what the church could be and the power it could have, and I felt like God wanted me to take that vision back.” He moved to San Francisco, began to meet in a home with some other believers, and, five years ago, founded We Are Church. “Things are so different his time around,” he says as he tells of how God is working, and as he describes how their church now bears a close resemblance to what they see in book of Acts. “While I believe I have loved Jesus for years, it feels totally different now.”

Having experienced something so much better, he is eager to share the lessons he has learned. “I’m often sad when I speak to Christians across the United States because I don’t hear many people speaking this way.” Letters to the Church is his way of addressing the church in America and calling them to something better, something he is convinced is more biblical.

This book has a number of notable strengths.

I love that Chan has broadened his perspective from only the church in America and that he is deliberately applying lessons learned from believers around the world. There is so much we can and should learn from believers in other lands who are ministering in different contexts and perhaps reading the same Bible through a different lens. We need the humility to learn from all our brothers and sisters. It is arrogant to assume the Western world is only ever meant to be the teacher rather than also the student.

I love that Chan aptly diagnoses some genuine concerns with the American church, and especially the megachurch model that he himself once adhered to. It’s hard to deny that “God designed the Church to be much more than what the majority of us experience in America.” He points out how many current models of church foster a consumerist mentality in which people attend church looking to be served rather than to serve and how these models can cause people to become critics rather than participants. He shows that large crowds often change a church so the leaders “can subconsciously begin preaching to avoid criticism rather than teaching truth regardless of the response.” After all, a huge church needs to maintain a huge crowd to provide for its huge budget; few pastors have the courage of conviction to risk turning people away.

I love that Chan is concerned not just for the church as an institution but for individual believers. It breaks his heart that “there are millions of men and women who have been taught that they can become Christians and it will cost them nothing. And they believe it!” He wants to see every Christian faithfully discipled, displaying Christian maturity, sharing the gospel, and planting new churches. And rightly so!

Over against American Christianity he holds up the house church model. His time overseas helped him see that churches do not need to be massive institutions lodged in suburbia but that they can serve far better if they remain small and nimble and deeply embedded in communities. “I believe God is leading a movement in this country toward simple, smaller gatherings, and I long to see this movement gain greater traction. I get so excited when I dream about the Church spreading in small, invigorating expressions that look and feel like the early church.” If most American churches are Blockbuster video, he says, house churches are Netflix, churches for the twenty-first century. His goal in writing the book is to get the reader to share this dream as well. In fact, all of his critiques of the American church are answered by the model he has discovered and begun to implement in California. The book is packed full of expressions of the success of this model and declarations of how closely it resembles the New Testament.

What does this church look like? It is congregations of no more than 20 to 30 people meeting in homes and planting new churches every year. The leadership is drawn out of the congregation, meaning there are always two men serving as elders and two more being trained as future elders and church planters. The pastors are almost invariably bivocational, pursuing their careers while pastoring as they are able. They are generally not seminary-educated because of the speed at which churches grow and spread and need new leaders. Compared to most churches, the worship services have a deeper focus on Scripture-reading, prayer, and the expression of each participant’s spiritual gift.

The book’s noteworthy strengths are tempered by a number of concerns.

I am concerned about how often he overstates his case. Chan consistently states the problem and his solution with far too much force and far too little nuance. His book is packed full of hyperbolic statements about the woes of the American church and the superiority of house church. Some of these are uncharitable while others tip into the absurd.

There is a consistent pattern of significant overstatement in relation to the problems with the American church and the superiority of the house church model.

I am concerned by his failure to identify God’s grace. The majority of Chan’s critiques are not sniper shots directed at one specific model of church but buckshot meant to hit every American church. It would be easy to read his book and conclude that house churches are the only faithful churches left, the only ones that are really honoring God. This is conveyed by a consistently negative tone.

In every case, and in so many more, his house church model is the answer. While I can’t deny there are some serious problems with some American churches, can’t we still see so many evidences of God’s grace manifested in these congregations? Shouldn’t we deliberately identify those so we can praise and thank God and he can receive the glory? Do we really believe the whole of American Christianity is in such woeful condition that it needs to be overthrown?

I am concerned this book has been written too soon. We should not overlook the fact that Chan has been at this for only five years. Every husband who has been married for five years is convinced he can write a great book about marriage and every mother who has a five-year-old child is convinced she can write a great book about parenting, but wisdom and maturity soon show five years is only the barest beginning.I am not the least bit opposed to house churches, but in my estimation, it is far too soon to laud and recommend a model that is only just beginning. It will take many more years to expose and correct its inevitable weaknesses.

By the end of Letters to the Church, Chan is concluding that his movement and book may be part of a new reformation. “We’ve always needed reformers and reformations to speak with the voice of the prophet, to call us back to what we were meant to be.” Maybe so. But, in my estimation, he does not convince that the house church model is the key to it.

I have a lot of respect for Francis Chan. There is no doubt he is a man who has strong convictions and who lives by them. There is no doubt that he has an extraordinary measure of zeal, and we need zealous people like him to help us identify our apathy and to challenge us to address it. But just as this book displays so many of the strengths that come with zeal, it also displays so many of the weaknesses. It is not a bad book, but a book that lacks the nuance and balance that could have made it much better.