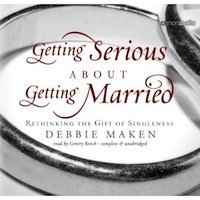 Buy from Amazon
Celibacy is for the celibate. That is a succinct summary of Debbie Maken’s argument in Getting Serious About Getting Married. This book represents a new movement but old movement within the Christian world to re-examine what the church believes on the issues of marriage and singleness. Singleness, we are told, is a gift of God. But, Maken asks, “if singleness is a gift, then why does it make us feel so miserable so often? Does God really want his children to embrace a gift they resent so much?” Single herself for many years, the author reflects on her long-term singleness and her eventual understanding that marriage and singleness are not equal options.

In this book, Maken argues that the church has, in many ways, absorbed our culture’s increasing rejection of marriage. Well-meaning but misguided pastors and leaders continue to feed this view by insisting that God regards singless as a special vocation, a unique and godly calling. Relying in particular on Paul’s first letter to the Corinthians, they teach that Paul himself, under the inspiration of the Holy Spirit, advocated singleness. While Maken’s interpretation of this passage is not as sound as I might have liked (she argues, for example, that the “I, not the Lord” refers to Paul giving a personal opinion), she shows quite satisfactorily that Paul was not advocating singleness in favor of marriage. Rather, Paul was advocating the gift of celibacy, a spiritual gift that is given to only a few or advocating a temporary delay of marriage during times of intense difficulty or persecution.

And this is where the church has made a serious error. The church has somehow determined that singleness and the gift of celibacy are one and the same. Not so, though, according to Maken. Singlessness is most often a choice or a circumstance, whereas celibacy is a gift of God that, like any spiritual gift, is to be used to His glory. Christian singles often try to console themselves by believing that they have been called to special service to God through their singleness. “Most deliberately single people I have met (people who choose to be single on purpose–usually men) often justify their status by pointing to some sort of pet ministry project on the side. Don’t get me wrong–I’m not against ministry projects at all. But people are generally not set apart to singlessness to build Habitat homes, serve once a month at the soup kitchen, or take a missions trip for a week or two each year. All those things can be done with a family–in fact, they can even be done with a family in tow.”

The biblical criteria for lifelong singleness are tough. “The Bible requires voluntarily and permanently renouncing marriage and all that goes with it. As 1 Corinthians 7:37 says, it requires one who is ‘firmly established in his heart’ and is determined to engage in a task that is clearly unaccomodating to family life, a task for the sake of the kingdom of God.” Biblical singleness is hard and requires that a person give up dating, sex, and marriage in order to have a wholehearted committment to a special type of service to God. If a person is not called to this type of singleness, he or she is called to marriage. “There is no middle ground.” A person who earnestly and passionately desires to be married and to have sexual relationships (both good, natural, God-given desires) simply is not called to be single. The Bible provides no category for people who casually date for years or decades while never committing to marriage.

This view is hardly new, but is the understanding that was held by the Reformers and by most Protestants until only a few decades ago. Many do not know that the Westminster Larger Catechism lists, as one of the things forbidden by the Seventh Commandment, the undue delay of marriage. In some Christian communities, singleness was regarded as abnormal and even as a crime! And yet, in our day, this has radically changed.

Where does the blame for this lie? Maken points the finger at men, saying that the true cause of protracted singleness is the lack of male leadership. She points to television shows such as Seinfeld, Friends and Everybody Loves Raymond, all of which glorify a type of perpetual bachelorhood or a weakened male role in the home. She shows that many men are refusing to grow up, but are living a second childhood even into their thirties and forties. “I believe there are three main factors behind the dearth of leaders: an education system that allows and promotes indefinite schooling, a lack of leadership in the home, and a lack of leadership within the church.”

As for the rest of us, Maken says this: “Instead of moving toward marriage unless God calls us otherwise, single women (and men too) have been taught that it is better to say single unless God orders marriage. We have it totally backwards! God already ordered marriage in Genesis. Marriage is the norm God established from the beginning. Marriage is what we’re to pursue unless God specifically calls us to remain single.”

Maken spends several chapters dealing with the conflicting messages, emotions and beliefs about singleness. She looks at the sovereignty of God in singleness, along with several common exhortations that singles have become accustomed to hearing: “wait on the Lord,” “Jesus is all you need,” “being single = knowing and serving God better,” “single = celibate,” and “you need to be the right person to meet the right person” (I would suggest that I am living proof that this is not true! If Aileen had to wait for me to become just the right person, she would be waiting still!).

She concludes with several chapters proposing ways that singles, and women in particular, can find a spouse. She exhorts Christians to reject the dating game and to only form relationships with a potential spouse who is also interested in getting married. She suggests that women should enlist agency in their relationships, most often relying on a parent or a more mature Christian for advice and mediation. And finally, she exhorts men to rediscover biblical manhood and to reclaim the leadership roles God created them for.

Dr. Albert Mohler says of this book that it is “a must-read for all Christian young adults–and for all who love them.” I am inclined to agree with Dr. Mohler. While I was not taken with all of Maken’s arguments, I do believe that she is generally correct. God has given us marriage as the normative estate. Unless a person has a clear calling to celibacy, he or she should pursue marriage. And this leads us to a place where the book may fall short. How many single men and women have sought marriage but have been unable to find a spouse? What of those for whom things just never seem to work out? There is little counsel for this type of person.

Still, small problems aside (including the obligatory mention of Mother Teresa as a pinnacle of Christian virtue, something that authors really need to stop), this is a good book and one that brings a biblical perspective to what is surely a thorny, emotional issue.