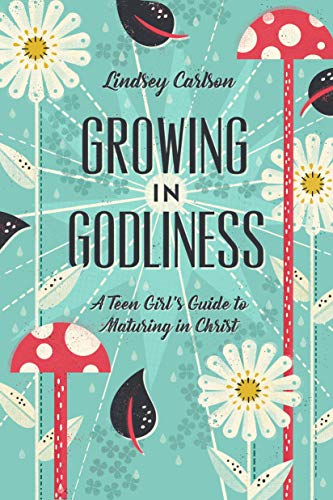 Lindsey Carlson’s Growing in Godliness is “A Teen Girl’s Guide to Growing in Christ.” Written specifically for teen girls who have professed faith in Christ, it is meant to help prioritize their first steps in Christian growth. Writing to her audience Carlson says, “As a Christian you are called to grow in godliness until you are conformed to the image of Jesus Christ. You do this by growing in the grace and knowledge of Jesus Christ. Christian growth should take top priority in your life not only as a teenager, but as long as you’re alive.” She says that throughout the book she will “challenge you to live to grow in Christ, to find purpose in all you do, and to trust God’s sovereign goodness. We’ll talk about your limitations, and I’ll point you to the tools God uses to equip you through his Word, his church, and prayer. I’ll show you why it’s important to keep a close watch on your words, emotions, and spiritual fruit, as they are all signs of spiritual life and health. There’s a lot to learn, but it’s all within reach.”

The book falls into three parts. The first, “Partner with God,” describes sanctification, purpose, and sovereignty, each in a short chapter. The second, “Depend on His Ways,” describes the means through which God sanctifies his people: Scripture, prayer, and the local church, while also addressing the importance of self-examination. The third, “Monitor Your Growth,” looks to a few measures of growth that may be especially key to teen girls: their words, their emotions, and their fruit.

All of this is packaged up in a small-format 120-page book, which I’d say is just right for her audience. And while books written for teens can at times be a little condescending in their tone, Carlson treats her readers with dignity. She writes for them and writes at their level, yet without pandering or, even worse, trying to be their peer. Rather, she writes as a mature older woman who has been there, learned from it, and is now stepping in as a kind of mentor-from-afar.

While I have no experience in being a teenage girl, I’ve got a fair bit of experience in raising them. And from the perspective of a father, I can say this book represents exactly the kind of knowledge and wisdom that will serve them well for the few years they are teenagers and for the lifetime beyond. In fact, I’ll be asking both of mine to read it over the summer.