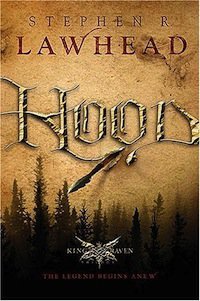 Buy from Amazon
Having read fifty or sixty nonfiction books already this year, I began to crave some lighter, easier reading. And, in a case of great timing, an Advance Reader Copy of Stephen Lawhead’s Hood arrived in the mail just a few days ago. Lawhead, known for writing fantasy and historical fiction, has set his sights on the greatest of the English heroes, Robin Hood. But rather than simply retelling the oft-told story, he has re imagined Robin Hood and has attempted to arrive at the source for this great story. This is a “completely re-imagined epic of the man known as Robin Hood–told in a far more earthy, eerie and elemental way than ever before.” In a lengthy appendix to the book, the author explains his belief that the story of Robin Hood may well have originated in Wales and provides ample proof that this just may be the case.

And so it is that the story of Hood is set not in Sherwood Forest, as we might expect, but in the dense, primeval forests of Wales. The son of a minor Welsh king, Bran ap Brychan finds his world torn apart when his father and his father’s army are massacred, leaving the young prince to ascend the throne. But, fearing for his life, Bran is forced to flee. He eventually wanders into the forest and establishes himself as king of those who have fled before him into the safety of the woods. He is a disturbed and flawed hero, but one who begins to grow into his legend as a hero who fought on behalf of the poor, displaced and persecuted. The usual cast of characters, Marian, Little John and Friar Tuck are all worked into the story, though once again, not in the way we’ve come to expect. The villains, also different from what we’ve seen in book and film, are well-crafted and not so evil that they are unbelievable.

This novel, which is due for publication in September of this year, is very well-written and tells a very intriguing story. It is difficult to do justice to as well-known and enjoyable story as Robin Hood, but Lawhead does so successfully. To tell the truth, I can’t think of the last time I enjoyed a novel as much as this one (though I’ll have to admit that this may speak more to the quality and quantity of fiction I read than the quality of this particular book!). Still, I found Hood to be a fun, exciting take on a great story. And what’s more, this is only the first novel in a series of three, so there will be much more to enjoy in the future.

While I am glad to recommend Hood I feel it necessary to point out that the book should probably be considered PG. There is a very small amount of rough language (words such as “bastard” and a handful of French equivalents), a few hints toward sexual activity, though certainly nothing graphic or voyeuristic, and a fair bit of violence, though nothing too graphic. And, of course, Robin Hood could not be told without at least a few people being impaled with arrows. Still, this is probably not a version of Robin Hood one would want to read with the family. But again, I enjoyed it tremendously and am already eagerly anticipating the sequels.