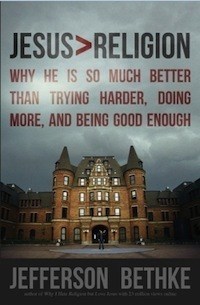 Jefferson Bethke is a YouTube sensation who exploded onto the scene in January 2012 when he released a spoken word poem titled “Why I Hate Religion, But Love Jesus.” Within three days it had been viewed 6 million times and as of today it has been viewed 25 million times. He went from unknown to celebrity in the blink of an eye. Now, nearly two years later, he has added “author” to his portfolio with Jesus > Religion: Why He Is So Much Better Than Trying Harder, Doing More, and Being Good Enough.

Bethke’s concern, then and now, is with what passes for Christianity in so many Evangelical contexts. While he does not use the term, he describes what Christian Smith labeled moralistic therapeutic deism, and he holds up Jesus—the Jesus of the Bible, rather than the Jesus of our imaginations—as a far better alternative. “We’ve lost the real Jesus—or at least exchanged him for a newer, safer, sanitized, ineffectual one. We’ve created a Christian subculture that comes with its own set of customs, rules, rituals, paradigms, and products that are nowhere near the rugged, revolutionary faith of biblical Christianity. In our subculture Jesus would never have been crucified—he’s too nice.”

Two years ago, a handful of notable Christians, Kevin DeYoung among them, expressed legitimate concerns with some of the content and the emphases of Bethke’s video, and it was an encouragement then to see Bethke respond with consideration and genuine humility. Since that time he has sharpened his ideas a fair bit. Yes, he still makes a forced contrast between Christianity and religion, as if the two are incompatible, but this time he carefully explains what he means. When he calls people away from religion, he calls them away from a system of thought or belief about “what one must do, or behave like, in order to gain right standing with God.” Where this kind of religion centers on our own attempts to prove our righteousness, Christianity centers on Jesus’ righteousness, offered to us. Where this kind of religion generates apathy, Bethke points to Jesus as a radical and a revolutionary whose message is scandalous and outrageous.

All through the book, then, Bethke contrasts this counterfeit Christianity with the real deal. He calls his readers away from the trappings of gospel-free Christianity and shows them that what Jesus offers is so much greater. Where religion makes enemies, Jesus makes friends; where with religion there are good and bad people, with Jesus there are only bad people who need grace; where religion is the means to get things from God, if we seek Jesus, we get God himself; where with religion if you are suffering, God must be punishing you, the biblical truth is that God has already punished Jesus on your behalf, so suffering cannot be separated from God’s mercy. In every chapter he sets up a contrast between religion and true Christianity and answers it with Scripture. All throughout he relates his own story of growing up in that moralistic culture, of abandoning this kind of religion in order to walk away from the church, and of finally being saved by the grace of God.

This is hardly the first book to contrast Christianity with religion, but of all the ones I have read, this is the first where the author understands and affirms the gospel of Jesus Christ’s substitutionary death and his atoning work. He offers many excellent insights into the joy and freedom of Christianity. He identifies sin as treason against God, he marvels at grace, he celebrates forgiveness, he anticipates future glory.

By way of critique, I would point out that Jesus > Religion grows notably weaker in the last couple of chapters, leaving it to end with more of a pop than a bang. I am glad Bethke calls his readers to love the church just like Jesus loves the church, but the appeal and the examples are not as strong as they could be. The book culminates in a appeal to trust in Jesus that could also have been significantly stronger (though certainly it contains the gospel). The book’s final words are taken from The Message and its translation of Matthew 11:28-30; this serves Bethke’s purpose in the book far better than it accurately translates the words or the meaning of that passage.

In his videos and in this book, Bethke is a popularizer of ideas. If you have read widely, you will quickly recognize the authors and pastors who have influenced him and whose ideas he is conveying. In this book, and in the other opportunities he has been given, he is choosing to popularize good ideas, and biblically-sound ones. And for this I am grateful. He is bringing these ideas to a very different demographic than most other writers. He is a leader within that restless YouTube generation, he has written a book for them, and I am convinced it will serve them well.