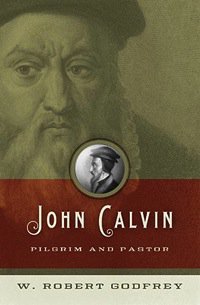 Buy from Amazon Buy from WTS Bookstore
There are not too many men whose five hundredth birthday is a cause for remembrance, not to mention celebration. Yet here we are, five hundred years after the birth of John Calvin, witnessing widespread celebration of his birth. This year we see many conferences dedicated to understanding Calvin’s impact on the church and on society, even centuries later, and we see the publication of many books looking at the man and his theology. It strikes me as a strange oversight that we do not yet have a definitive biography of Calvin (as Marsden has done for Edwards, as Dallimore has done for Whitefield, as Murray has done for Lloyd-Jones, and so on) and I am hoping that this year will end the drought–that by year’s end we will have that one biography that will stand for many years as the definitive life of Calvin. With several biographies set for release in 2009, one would think this ought to be the year.

Into the fray steps Robert Godfrey with John Calvin: Pilgrim and Pastor. He begins by saying “Today for many people the name of John Calvin is known only in a vague sense and has become a label for attitudes that are negative, judgmental, and joyless. Historians, by contrast, know that John Calvin was one of the most remarkable men who lived in the last five hundred years and that his influence on the development of the modern western world has been immense.” Indeed, Calvin’s influence is felt in the rise of democracy, capitalism and even in modern science. “The life and work of John Calvin have always been controversial as well as influential. Some have loved him, and some have hated him. All would agree that he was a man with a brilliant mind and a powerful will who had a profound impact on the development of western civilization. But was the impact positive or negative?” Even among Christians, many of whom have no sense of the debt they owe Calvin, many see the negative much more than the positive. Everyone has an opinion about Calvin but one wonders how many of these opinions are based on fact.

Even in his own day Calvin was loved by some and hated by others. Even in his own day he was a figure of great controversy. Yet, as Godfrey points out, he did not set out to be controversial or to be a figure of great renown. “The real Calvin was not in the first place a man who lived to influence future generations. Rather he was a spiritual pilgrim finding anew the apostolic Christianity expressed in the Bible and serving as a faithful minister of that Word in the church of his day. The influence that Calvin would have regarded as most important was as a purifier of the Christian religion and a reformer of the church for his day. The essential Calvin was a pilgrim and pastor. From that reality all his influence flowed.” This book is “an introduction to the life and thought of John Calvin,” a man who lived out his faith as both a pilgrim and a pastor.

Though the book introduces Calvin’s life and his thought, it focuses primarily on the latter. The first few chapters, along with the final one, give that overview of his life. It looks to the outline we tend to be familiar with–his “fateful” journey from France to Strassburg and his meeting there with William Farel who convinced Calvin that he must stay; his initial ministry in Geneva and his eventual banishment; his short ministry in Strassburg; and the rest of his career after returning from his exile and taking up again his ministry in Geneva.

The bulk of the book describes Calvin’s theology. Some of this theology is woven into biography, but in many cases it stands alone. Godfrey focuses on topics such as the church and worship, predestination, sacraments, city and schools, and Calvin as pastoral counselor. He describes each well, looking primarily at how Calvin formulated his thoughts and his theology in each of these areas. He looks often to Calvin’s writings, the Institutes, his sermons and his voluminous personal correspondence. I feel that the chapter on Calvin as Pastoral Counselor is particularly important to those who would seek to understand Calvin as something other than the caricature so many present. Here we see a man who had a pastor’s heart and who was eager to bless and encourage others. He shows himself to be a far cry from the angry tyrant that so many present him as. Godfrey clearly has an exhaustive knowledge of Calvin and in this book he conveys it in a way that is at once deep and accessible.

In the end analysis, John Calvin: Pilgrim and Pastor is more of a life and theology than a life and times. Perhaps history has not recorded enough about Calvin’s life that we can construct the kind of biography that would be the equal of Marsden’s Edwards or Dallimore’s Whitefield. We will continue to wait and see. But I do not wish to criticize this book for what it is not and, perhaps, what it cannot be. This is, after all, a very good overview of Calvin’s life as well as a description and assessment of his theology. What it seeks to do, it does very well and it is well worth the read. As you close the back cover, you will know more about Calvin the man, more about Calvin the theologian, and more about Calvin’s influence in history. And I suspect, even if you cannot agree with all of his theology, you’ll thank God for raising up the right man at the right time. Calvin is one of those rare men who deserves to be remembered, even on his five hundredth birthday.