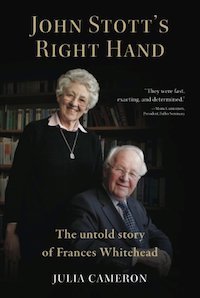 Here’s a new book that combines two things I love: Books that come from off the beaten path, and ones that deal with interesting but ordinary people. As it happens, John Stott’s Right Hand was privately published after being turned down by trade publishers, and it tells the life of a fascinating but relatively unknown individual.

John Stott’s name is known around the world. For decades he was one of Evangelicalism’s most prominent voices. His ministry impacted millions and his legacy will endure for generations. What most people do not know is that for 55 years Frances Whitehead served alongside him as his secretary. But she was more than that. She was his gatekeeper, stenographer, typist, encourager, and enabler. Fittingly, before he died he also made her executor of his estate. This book tells her story.

Whitehead first encountered Stott when she, as an unbeliever, began attending his church. She was a young woman working for the BBC and would sometimes walk across the road to visit his church on her lunch break. Going into that church she would hear Stott preach, and over time the words he preached began to take root, and she came to faith. It was not too long after her conversion that Stott asked her to serve as his secretary. She accepted the position, little knowing that she would hold it for more than five decades.

For all those years Stott and Whitehead labored side-by-side, both of them remaining single and both of them remaining singularly focused. She typed his books, she kept people from interfering with his rigid schedule, she organized his life, she drove him to and from the airport, and she even traveled with him on many occasions. She sat beside him in the nursing home when he went to glory, and eulogized him at his funeral. She was his helper and right hand through almost his entire ministry.

Of course people will naturally wonder about the nature of the relationship. Was it romantic? Did they ever struggle with feelings for one another? Is it even possible that they could work together so closely and for so long while maintaining a platonic relationship? Indeed, it is.

John’s and Frances’s ability to work together so closely for so long was a mark of grace. Two single people of similar age working long hours, under pressure, in pursuit of the same goal, would, for most mission agencies or churches now be avoided. It is a tribute to both of them that for twenty years, before the study assistants arrived, they succeeding in working so closely as a team of two. They both had a high level of inner discipline, partly innately and perhaps partly the product of their upbringing and education. While unspoken to one another, they resolutely did not allow for romantic hopes to take root; embarrassment and awkwardness would have undermined a remarkable working friendship.

It was a unique partnership, and one for which the English language perhaps has no word.In an age which underplays the dignity of serving, it is hard to understand that aspect alone of Frances’s make-up, a woman so able in her own right. Her role was texture, layered, diverse. It has been described as a kind of “marriage without the marriage.”

What kept them from transgression, or even true and godly romance, was their shared sense of calling. Stott believed God had called him to a life of singleness so he could give himself to writing, teaching, and raising up leaders. Whitehead believed God had called her to a life of singleness so she could serve Stott. Mark Labberton says, “It was a relationship of mutual honor and love, respect and affection, playfulness and partnership, independence and interdependence. John was able to do what he did because Frances was able to do what she did.”

Whitehead’s life is interesting because she is an interesting person, but it is interesting as well because it intersected the life of such an important figure. She allowed him to be who he was, and she allowed him to do what he did. Those of us who have benefitted from Stott’s books and commentaries and other efforts have unknowingly benefitted from Whitehead’s long service. She is one of those unsung and unknown Christians who faithfully served her Savior by serving one of his servants. I am thankful that we can now know her story as well as Stott’s, because it is, really, just one story in two parts.