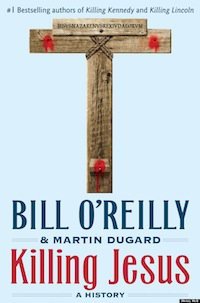 This book is going to be big, a near-lock for the bestseller lists. First Bill O’Reilly and Martin Dugard teamed up to write a book about Killing Lincoln and it sold more than a million copies. They followed it up with Killing Kennedy and it sold briskly as well. And now they turn their attention to their greatest subject: Jesus of Nazareth. Killing Jesus: A History is a short biography of Jesus, focusing on the events leading to his death.

From the outset, the authors make it clear that though they are Roman Catholics, they are not writing a religious book. Rather, they are writing a historical account of a historical figure “and are interested primarily in telling the truth about important people, not converting anyone to a spiritual cause.” They necessarily rely on the four gospels for their source material and often tell their story by directly quoting the Bible.

They begin, though, by setting Jesus firmly in his historical context and skillfully telling about the rise and fall of Julius Caesar and the subsequent ascension of Caesar Augustus. They introduce a cast characters who each make an appearance in the pages of the Bible: King Herod who would hear of a potential challenger to his throne and order the slaughter of innocent children, Herod Antipas who would behead John the Baptist and later refuse to deal fairly with Jesus, and Pontius Pilate, who would cave to pressure and order the execution of an innocent man. Each of these men becomes a living and breathing character in the narrative.

As the authors begin to tell about the life of Jesus, they follow the biblical accounts quite closely. They tell his life skillfully and with all the narrative tension and interest they used to tell their compelling accounts of Lincoln and Kennedy. The reader is left with no doubt that Jesus’ whole life was leading to a cross and that Jesus knew he would end up there. The reader sees that the claims Jesus made about himself put him at odds with both the Jews and the Romans.

As they approach Jesus’ death, the authors slow the pace a little, showing the injustice of the trial, the torment of crucifixion, and the necessary conclusion that Jesus really and truly died.

They take some license along the way, of course. The gospel writers were selective when they wrote about the life of Jesus and any author must at times fill in or at least imagine certain details. But even then, O’Reilly and Dugard have done their homework and refrain from taking large or irrational leaps from their source material. And because they tell the account using the Bible as their source, they are able to tell the story as if it is true and as if they believe it. They do not say, “he supposedly did this” or is “reputed to have done this.” They simply tell it as the Bible tells it.

As a historical account of the life of Jesus, the story, though selective, is well told, well written, and very, very interesting. This is especially true when it comes to the historical and cultural contexts, details the biblical writers were able to assume and, therefore, not describe in great detail. I am no expert on this period of history, but spotted no major missteps and felt the authors were attempting to do justice to the historical facts the Bible presents. Their list of secondary sources is quite strong, leaning more toward conservative than liberal authors.

However, Jesus’ life is not mere history. Yes, he was a real man who lived a real life and died a real death, but that is not all he was and all he did. He also claimed to be God’s Son and his followers claimed that in his life and death he had done something unique and, literally, world-changing. The same Bible that describes Jesus’ life, also interprets and explains it. And this is the story the authors do not tell.

Any author who writes a narrative account of Jesus’ life will find it difficult to do justice to both his humanity and his divinity (and we saw, for example, in Anne Rice’s series on Jesus). These authors err far to the side of his humanity. It becomes quickly apparent they will not focus on Jesus’ miracles. While they mention a few of the wonders he performed, and especially the ones involving healings, they do not commit all the way and tend to present these as events Jesus’ followers believed had happened as much as events that had actually taken place.

The authors primarily portray Jesus as a rebel against Rome who threatened to destabilize the region and who, therefore, suffered the inevitable wrath of the empire. They show that through his life Jesus believed he was the Son of God and even suggest this must mean he was either a liar, a lunatic, or that he really was who he said he was. As the book comes to a close they state that Jesus’ followers soon claimed he had been raised from the dead and that his followers believed this to such an extent that they willingly gave up their own lives to his cause.

Killing Jesus is not a bad book as much as it is an incomplete book. As history it is compelling, but of all historical events, none has greater spiritual significance than the life and death of Jesus Christ. And this is the story they miss.

A brief aside before I wrap up: If you have read Killing Kennedy you may remember that the authors seem have a strange obsession with kinky sexuality. Both Kennedy and the Roman rulers give them a lot to work with in that regard, and in this account they are sure to point to the ugly sexual deviancies that marked the Roman rulers of that day. While they do not go into lurid detail and do not mean to excite lust, neither do they exercise a lot of discretion, making this a book you would probably not want to hand to a child.

As O’Reilly and Dugard begin this book they claim the story of Jesus’ life and death “has never fully been told. Until now.” That’s very dramatic but also ridiculous. This story has been told repeatedly over the past two millennia and it will be told again and again in the millennia to come. Killing Jesus is another account that will be here for a while and then disappear and be forgotten. In the meantime, it will take Jesus out of the realm of fantasy and place him squarely in history, but even as it does that, it will neglect to tell why his life, his crucifixion, his resurrection are of eternal significance, a matter of his life and death and our own.