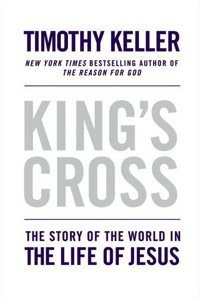 Buy from Amazon Buy from WTS Bookstore
Tim Keller’s career as an author has been rather unusual. Ministries of Mercy, his first book, was published in 1997. It was 11 years before he wrote his second book, The Reason for God, a title that rocketed right onto the New York Times list of bestsellers. Since then he has averaged more than a book a year and each of those titles has garnered a lot of acclaim; within just a few years Keller has established himself as one of the most significant Christian authors. New for 2011 is Redeemer, a publishing imprint with Dutton (which in turn is an imprint of Penguin Publishing) and the first book published under that banner: King’s Cross: The Story of the World in the Life of Jesus.

This is a book about Jesus–Jesus as he is portrayed in the Gospel of Mark. Keller says, “It is an extended meditation on the historical Christian premise that Jesus’s life, death, and resurrection form the central event of cosmic and human history as well as the central organizing principle of the world–and how we fit into it–is most clearly understood through a careful, direct look at the story of Jesus. My purpose here is to try to show, through his words and actions, how beautifully his life makes sense of ours.” Understand Jesus and you will understand the world: that is the central premise of the book.

King’s Cross is based upon a series Keller preached on Mark and the expository tone and structure remains. And yet somehow reading this book does not feel like reading sermons–it feels like meditation upon a text. Its style is pure Keller, probably closest to The Prodigal God, though certainly there are similarities with his other titles as well. This is not an exposition of the entire text of Mark, but rather an exposition of some of the more significant moments. And in that way it reads like a biography of Jesus, an account of his life, his death, his meaning, his purpose. While Keller inevitably turns to the parallel accounts of Jesus in the other gospel, his central focus remains Mark.

As you might expect, the structure of King’s Cross mirrors the structure of the Gospel–the first half is dedicated to Jesus’ life while the second half is dedicated to his death and resurrection. Most of the chapters are similar lengths and the writing style is geared very much for the layperson, and perhaps especially for a person with little theological background. And this is what Keller does so well–speak to unbelievers or to new believers. This is a book you could hand to just about anyone as a means of introducing that person to Jesus–to who he is and to what he has done.

One reviewer has said that this is the book where Tim Keller hits his stride as an author. I don’t see it quite like that; this book is very consistent with Keller’s previous titles and, at least in my assessment, does not represent a great leap forward. And I mean this as a compliment rather than an insult. I think he has already hit his stride. This is a good book offering a broad look at the Gospel of Mark. It draws the reader to the cross, to the great work of atonement accomplished there. Christ is the focus of every chapter, his work the thread that leads the reader from the first chapter to the last. This is a commentary for all of us, an exposition that is a joy to read.

Whether you read it devotionally at a pace of a chapter a day or whether you read it in a couple of sittings, King’s Cross will prove beneficial to you. It’s the Gospel of Mark laid out in plain language, explained in contemporary terms and applied to life. And that’s what good exposition is all about.