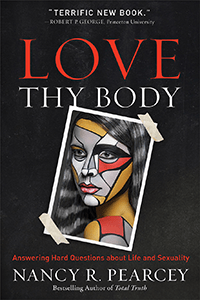 It is always a big deal when Nancy Pearcey releases a new book. It’s a special pleasure when that release is timed for the beginning of a new year. Such is the case with Love Thy Body: Answering Hard Questions about Life and Sexuality. In this new work she brings her unique voice to some of the most pressing moral issues of our day. “In Love Thy Body,” she promises, “we will move beyond click-bait headlines and trendy slogans to uncover the worldview that drives the secular ethic. By learning the core principles of this worldview, you will be able to engage intelligently and compassionately on all of today’s most controversial moral challenges.”

And, indeed, that is exactly what she does and exactly what she delivers. As in all her works, she shows that the prevailing worldview around us is one that involves a two-tiered reality that places theology and morality in the realm of what is private, subjective, and relativistic while placing science in the realm of what is public, objective, and valid for all people. Thus secular science reigns supreme over all other matters, including faith. This then leads to a fact/value split where values are placed in the first realm and facts in the second. Your values are for you to live by, perhaps, but they have no bearing on the rest of humanity.

In Love Thy Body she shows how this very divide is at the heart of so many of today’s moral issues. The world around us neglects the core unity of human beings and instead divides us into two-tiered beings. “Christianity holds that body and soul together form an integrated unity—that the human being is an embodied soul. By contrast, personhood theory entails a two-level dualism that sets the body against the person, as though they were two separate things merely stuck together. As a result, it demeans the body as extrinsic to the person—something inferior that can be used for purely pragmatic purposes.”

After a thorough introduction that will get you caught up if you have not read Pearcey’s previous works, she turns her attention to six key issues, each of which can be explained and combated through a right understanding of the secular worldview that underpins them. In “The Joy of Death” she shows how body/person dualism is behind arguments for abortion and infanticide while in “Dear Valued Constituent” she looks at euthanasia, stem cell research, and even the growing movement toward transhumanism. “Schizoid Sex” shows how the hookup culture so prevalent on campuses today claims to set the body free, but actually diminishes its important. “The Body Impolitic” and “Transgender, Transreality,” turn to homosexuality and transgenderism. The final chapter, “The Goddess of Choice Is Dead,” turn from the individual to wider society.

Put together, this is a powerful book that brings Pearcey’s unique and uniquely-helpful voice to crucial issues. “We live in a moral wasteland,” she says, “where human beings are desperately seeking answers to hard questions about life and sexuality. But there is hope. In the wasteland we can cultivate a garden. We can discover a reality-based morality that expresses a positive, life-affirming view of the human person—one that is more inspiring, more appealing, and more liberating than the secular worldview.” Read this book to grow in your ability to do that very thing.