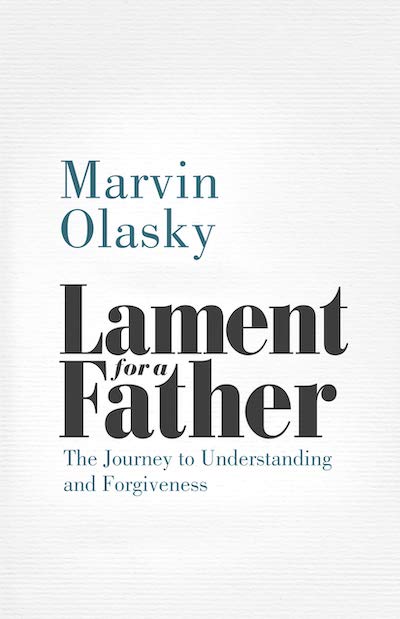 If someone were to ask me, “Should I read Marvin Olasky’s Lament for a Father?,” the answer would be simple: Yes. But if someone were to ask me, “What is Lament for a Father?,” I’m not sure I could as easily answer the question. It is not quite a biography and not quite an autobiography. It is not quite a memoir and not quite a topical book on family or parenting. Perhaps, then, it’s best described as a kind of tribute, a statement of respect and perhaps even gratitude, from a son to his father.

Here’s how Olasky begins the book:

I’ve watched many times Field of Dreams, the 1989 movie starring Kevin Costner. Flawed though the film is, it always chokes me up. Although called “a baseball flick,” the underlying motif is father-son relationships. At the end, Costner’s character asks his dad, “You wanna have a catch?”

My lifetime catches with my father: zero.

This aptly introduces the difficult relationship between the Olasky father and son. One day they actually do go outside to play catch, but the fun lasts for just one throw before the father walks back into the house to never play again. It’s a small thing, of course, but in some ways still a significant one, for the hurt the young Olasky feels that day extends to many other parts of life. And now, many decades later, his book is an attempt to make sense of it, to figure out why his father behaved that way.

Marvin Olasky’s story is certainly a uniquely interesting one. He is born into a relatively poor Jewish home and to parents who battle, resent, and sometimes torment one another. Though his father is an intellectual, a Harvard grad, he lacks ambition, he lacks drive, and is unable to provide steadily or abundantly. He speaks seldom and tells his family little about his life and background. It is left to Marvin to do the research and fill out the story, which is exactly what he does in the pages of this lament.

And a lament it is—a lament for what he missed in having a distant and disconnected father, but also a lament for what his father and his father’s fathers endured first in their countries of origins, then in their newfound home of America. And perhaps it’s also a lament that no father can be all his children want him to be, that no child will ever have exactly the father he wishes. Beyond the lament is the theme of attempting to understand so he can, in turn, forgive. As he comes to better understand his father, bitterness is replaced by compassion, resentment by forgiveness. This is, I expect, why Wayne Grudem can write, in his brief endorsement, “Anyone who has experienced a difficult parent-child relationship will appreciate the wisdom in this book.” For while this is a book about a particular father and son, it speaks to universal themes.