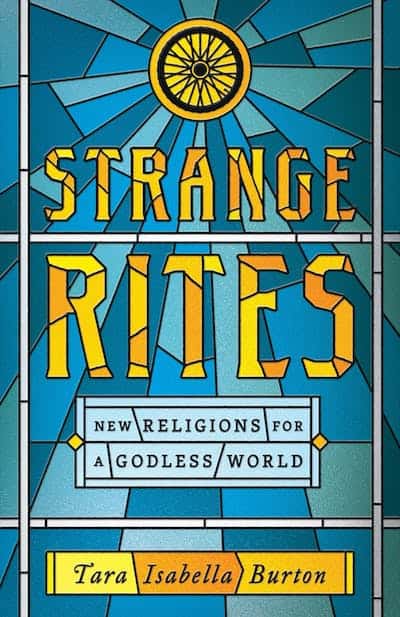 We’ve all heard by now of the rise of the “Nones,” that growing demographic that, when filling out a census, marks their religious affiliation as “None.” While until recently they made up only the smallest minority in America (and the rest of the Western world) they may now come close to forming a majority, especially among the younger generations. A common narrative among Christians is that people are migrating away from traditional Judeo-Christian faiths in favor of liberal secularism. But might it be possible that people are not actually abandoning religion as much as they are exploring, embracing, and even customizing a whole host of new spiritual traditions and subcultures? Might it be possible that people are not becoming less religious but more? These are the questions Tara Isabella Burton sets out to answer in Strange Rites: New Religions for a Godless World.

Burton believes that behind the Nones are people whose beliefs and practices are, to varying degrees, a mix of traditional institutional religions and personal, intuitional spiritualities. She calls these people the “Remixed” and says that though they are drifting away from their Judeo-Christian roots, they are still seeking what religion offers: meaning (a sense of why the world is the way it is), purpose (shaping life according to that meaning), community (joining with others to better understand meaning and better enact purpose), and ritual (actions or occasions in which the community acts together to reify and reaffirm a sense of community and a sense of purpose). While some of the Remixed have cut all ties with traditional faiths, others maintain a connection to a church or denomination, though they freely disregard elements of that faith they dislike and integrate elements of other faiths they deem attractive. She calls such people the “Remixed” because rather than creating new religions they are actually blending together elements of many others. Their most successful forms have integrated the power of consumerism to make them branded, salable, and, therefore, even more popular. Today the Remixed may make up nearly 50% of the population of the United States.

Of course America has long seen intuitional religions rise and fall. Transcendentalism, Spiritualism, New Thought, New Age—each of these was a faith of intuition, of feelings, desires, and experiences rather than writ and creed. It should be no great surprise that the tide has once again turned and is sweeping people away from institutional faiths in favor of intuitional alternatives. But while intuitional faiths have historically proven relatively minor and short-lived, is it possible that today’s New Great Awakening could permanently reshape the American religious landscape? Burton believes it is, and points to three reasons.

The first reason these remixed faiths may stick around is the absence of wider demographic pressure toward alternatives. Family and society no longer exert significant pressure toward traditional faiths, for in general the Remixed are the children of parents who already had no more than a formal, token association with a church. The second is the power of consumer capitalism. Big businesses have identified the spiritual longing among the Remixed and have begun selling not just products but also values, so that consumerism now strengthens and spreads the power of these Remixed religions. The third is the rise of the Internet through which we so easily form into tribes and through which we all come to demand a role in designing and personalizing our experiences. Says Burton, “Our spiritual profiles, like our Facebook profiles, need to be individualized.”

A number of forces have combined to bring about and shape Remixed culture and, strangely enough, one of the most important is Harry Potter, for it marked the beginning of an Internet through which people wanted not just to consume content but to co-create it. The Remixed came of age just as Harry Potter was achieving its ascendency. As they read the novels and watched the films, they went online to discuss and remix them. The books made such a deep impact not just because people enjoyed the stories, but because they enjoyed the participatory culture they fostered. Through it all people came to expect more from what they consumed, so that stories were no longer meant to just entertain or teach, but to serve. “It’s impossible to understand Remixed spirituality—and the degree to which we seek out more precisely calibrated identities and tribes—without understanding the way that Internet culture, and fan culture in particular, primed us to expect, and even demand, narratives, practices, and communities that we found personally meaningful.”

Other cultural forces have influenced the Remixed, and wellness culture is high among them. Whether through Oprah Winfrey, Gwyneth Paltrow, SoulCycle, mindfulness apps, or a million other personalities and products, wellness has become a cohesive philosophy of life that warns of a great divide between the pure, good self and the malevolent forces of society with its rules and expectations. The law of attraction calls us to harness the universe’s energy to get what we want so we can become our authentic selves. Witchcraft has also gained new traction with its feminist and obsessively anti-Christian ideology. Intrinsically activist, it means to bring down “the system.” And, of course, there is the force of transgressive sexuality that pushes hard against any kind of faith in the goodness, necessity, and normalcy of heterosexual monogamy. If humanity is essentially good, then so too are our sexual desires, and expressing them—and even identifying ourselves by them—becomes an act of both authenticity and bravery. Wellness, witchcraft, and sexual utopianism have all been embraced by big business and thus have all entered into the cultural mainstream; they have all become boxed and branded.

While no two Remixed may be identical in their beliefs and convictions, many are still coalescing into common strains—into the “new religions for a Godless world” of the book’s subtitle. Burton focuses on three, two of which are currently contending for the role of America’s de facto civil religion (social justice and techno-utopianism), and one of which is making a charge (atavism). Social justice is a progressive ideology that has increasingly taken on all the markers of a religion. Coming into its own with the candidacy and election of Donald Trump, it takes as its starting point that America is rotten to the core, a nation founded upon white supremacy, patriarchy, and all manner of repression represented by President Trump. Social justice provides a thorough and cohesive explanation of the world and the way humanity ought to respond to it. It offers meaning (the world is the way it is because the powerful are always vying for more power), purpose (self-denial for the privileged and self-love for the marginalized), community (a growing collective of people who carry out their activism together), and rituals (purgation and renewal through self-denunciation and cancel culture). It offers the vision of a utopia of perfect equity in which the powerful have been lowered and the marginalized elevated.

Where social justice is progressive, techno-utopianism is libertarian. It worships human potential and sees a glorious future in which we have transcended the limitations of the human body through biohacking and artificial intelligence. Where social justice locates the self at the intersection of both social and physical identities (your deepest self is your race, your sexuality, etc), techno-utopianism locates it exclusively in the mind, for it sees the body as little more than a hindrance to be overcome. But understand see the purification and perfecting of the self “as a necessary part of achieving a wider utopian order characterized by the harnessing of human potential.”

A rising challenger for the de facto Remixed religion is what Burton refers to as “New Atavism”—an agnostic faith that focuses on traditionalism, authoritarianism, and established gender roles. Its advocates range from the relatively benign Jordan Peterson to the much more dangerous Neo-Nazis of the far right. Atavists treat the body as the ultimate site of meaning, for they admit no real concept of transcendence. Rather, there is only the cold, Darwinian universe that offers no law beyond evolution. Thus atavists embrace a kind of Stoicism in which they do their best to embrace the biological reality bestowed on them by evolution and try to bring order to the chaos of their lives and the chaos of the world. It’s a “pull yourself up by your bootstraps” religion, and no guru of the movement has been more important than Peterson who “in detailing the pitched battle between order and chaos, created a modern, nontheistic myth that renders the world meaningful.”

So where does this leave us as Christians who have a deep concern for the souls of others and a God-given Great Commission to fulfill? It leaves us with the crucial understanding that Western society is not actually becoming irreligious, despite the laments of many Christian leaders. Rather, as people leave behind Christianity and other traditional faiths, they are embracing eclectic, personalized, secular alternatives. If they will not pursue meaning, purpose, community, and ritual within religious traditions and according to creeds and dogmas, they will seek it elsewhere. If they will not come by their beliefs through institutions, they will come by them through intuition. But this leaves them vulnerable and ultimately hopeless, for all of these new religions locate meaning within this world rather than outside of it. Their narratives, from origins to anthropology to soteriology to eschatology, are immanent rather than transcendent, and therefore ultimately doomed to disappoint and to fail. They offer utopian visions that cannot and will not be realized.

Contra the bespoke religions of the Remixed, the Christian faith offers true transcendence based on a received, cohesive religion. It offers meaning, purpose, community, and ritual that arise not from the mind of men but from the mind of God. It offers a narrative that began beyond this world and will end beyond this world all because God entered into it. Instead of calling us to embrace our human potential and to have faith in ourselves, it calls us to embrace our human limitations and to put our faith in Christ. This is the Good News that for two thousand years has survived and thrived in the face of myriad contenders. This is the Good News that is more than equal to the challenge of all these Remixed religions. This is the Good News we must still preach.

Strange Rites: New Religions for a Godless World is available at Amazon.