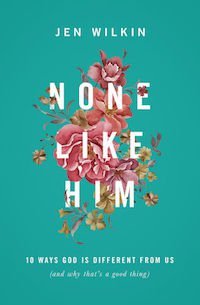 Let me first tell you how None Like Him begins, then make two brief observations. “If you had told me five years ago that I would one day write a book for Christian women that led off with a quote from Proverbs 31, I probably would have punched you in the face.” The first observation: You know this book is going to be interesting when it begins with face-punching. Second, while Wilkin says she has written a book for Christian women, it’s a book that will be just as beneficial for men. Though the introduction is titled “On Becoming a God-Fearing Woman,” there’s no reason a man cannot read it and benefit. After all, None Like Him is a book about the attributes of God, and that subject is one for every Christian to ponder.

God’s attributes are his traits, his qualities. Theologians tend to make two lists of attributes, dividing them by those that are unique to God and those that he has given to other creatures. In the first group, his incommunicable attributes, they place infinite, incomprehensible, eternal, omnipotent, and several more. In the second group, communicable attributes, they place holy, loving, just, merciful, and so on. These attributes have already been the subject of many books, with luminaries like Charnock, Pink, Sproul, and Tozer writing excellent works on them. What, then, distinguishes Wilkin’s book?

Partly it is audience, since her book is written by a woman for women. But even more so, it is her focus: She focuses entirely on the first group, the traits that are true of God alone. As she examines them, she attempts to answer this question: “How should the knowledge that God is _______ change the way I live?” In other words, what measurable change should occur as a result of meditating on God’s unique attributes? Further, she means to show how we, as human beings, treat the first list. “Though this list can be true only of God, we want it to be true of us. It reveals how we try to rival God. We want this list to be true of us more than we want” the other list to be. We try to steal the glory that is God’s alone by craving the attributes that are God’s alone.

Thus, through ten chapters, she examines God’s ten incommunicable attributes, showing that God is infinite, incomprehensible, self-existent, self-sufficient, eternal, immutable, omnipresent, omniscient, omnipotent, and sovereign. At the end, she wraps up with more face-punching and another key text she finds herself surprised to be expositing: Psalm 139:14. “I praise you, for I am fearfully and wonderfully made.”

As 2016 drew to a close, I compiled a list of the most-recommended books of the year. None Like Him made its way to the top of the list and, on that basis, I determined I would read it. I’m glad I did. In the opening pages, Wilkin tells of the importance of studying God’s attributes, God’s majesty: “When we lose sight of the majesty of God, we invariably fill the gap in our vision with the fable of the majesty of someone else. We revere a spouse or a leader. We worship our children or a friend. We even give reverence and awe to ourselves. And this is complete folly. Not only is it unwise to give our worship to someone other than God, it is the very definition of irrationality. And it’s an exhausting business.” She provides an antidote: She leads us in “embracing our limits in light of our limitless God.” She leads us to deeper knowledge of God, deeper knowledge of ourselves, and deeper knowledge of the infinitely vast chasm between us. She does so skillfully, faithfully, and biblically.