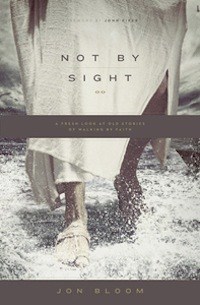 Buy from Amazon Buy from WTS Bookstore
Sometimes I read a book and can later point to a page or a chapter and a specific idea I drew from it. When I later write a review of these books I can usually point to that idea and say, “Here is what I learned; here is what the author taught me.” I love those books and in many ways can chart my spiritual growth through them. But these are not the only books that are valuable to me. There are also the books that that evoke wonder or worship even when I cannot later go back and point to that specific truth that resonated in my mind and heart. Such is the case with Jon Bloom’s Not By Sight.

Not By Sight is a book about walking by faith. It is a fresh look at familiar old stories drawn mostly from the New Testament but occasionally from the Old as well. Bloom says, “The purpose of this little book is to imaginatively reflect on the real experiences of real people in the Bible in order to help you grasp and live what it means to ‘trust in the LORD with all your heart, and … not lean on your own understanding’ (Prov. 3:5). Its goal is to help you believe in Jesus while living in a very confusing and painful world.”

In thirty-five short chapters he goes to stories like Jesus calming the storm-tossed seas, Joseph receiving the news of his fiancee’s pregnancy, the leper being healed, the disabled woman made to stand straight, and he tells them again. Sometimes he speculates a little bit, wondering how Pilate and his wife received the news that the innocent man who had been condemned was now alive again or what it was like for Andrew to live in the shadow of his brother Simon Peter. He tells of David’s regret over his affair with Bathsheba and Joseph’s prayer and praise during those long years locked away in an Egyptian prison. And always he looks for faith. When he spots that faith he calls on the reader to identify with it and to emulate it.

Chapters seventeen and eighteen were highlights for me. Though sequential they are unrelated except for the common thread of faith. One tells of the humility of the Apostle Paul. This was a humility he was forced to learn when he prayed not once, not twice, but three times to have the Lord remove that thorn from his flesh, only to learn that it was to be a continual reminder to him to trust in the Lord. This thorn in the flesh, this messenger of Satan, was actually a gift of God. Will I have faith to see the weaknesses God has assigned to me as blessings? Or will I resent them? The second tells of a leper who wanted what only God could give–deliverance from his disfiguring disease. He asked and he received. Do I have the faith, the confidence, to ask God for the things he wishes for me to ask him? How might he display his power to me or through me if only I would ask?

This is a book to savor, and I read far too quickly. I enjoyed it so much I just couldn’t help it! I couldn’t read it as slowly as it deserves, and for that reason will need to read again. It is a book I will ask my son to read this summer along with his devotions; he, at thirteen, will be able to read and understand it and will certainly benefit from it. It is a book you should consider reading as well; I have every confidence that you will enjoy it too.