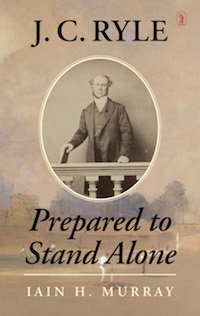 I trust you know the rule when it comes to books by Iain Murray: If he writes it, you ought to read it. Murray has a long legacy of authoring books that look to the past to help us better understand the present. Through this work he has had an unexpected and far-reaching impact, and any serious account of today’s New Calvinism needs to tell of his influence. When Mark Dever wrote a series titled “Where’d All These Calvinists Come From?” his first three answers were Charles H. Spurgeon, D. Martyn Lloyd-Jones, and The Banner of Truth Trust. Interestingly, all three of these involve Murray. He founded Banner of Truth Trust, he wrote the definitive biography of D. Martyn Lloyd-Jones, and he published Arnold Dallimore’s popular biography of Charles Spurgeon. Truly, he has had an outsized influence.

Murray’s latest work is a biography of the great Anglican bishop J.C. Ryle and its release is timed to coincide with the two hundredth anniversary of its subjects birth on May 10, 1816. Considering Ryle’s legacy and influence there have been surprisingly few accounts of his life. I’m glad to see Murray remedy that.

Born to a monied family of nominal Christians, Ryle was educated at the finest institutes and well on his way to a life of luxury and ease. Illness intervened in his life and drove him to the Bible which soon exposed to him the perilous state of his soul; meanwhile, disaster intervened in his family and left them bankrupt. With his prospects radically diminished, Ryle reluctantly looked to the church for a career and a living.

Despite his hesitation, he soon found that he was a skilled teacher and counselor. He came to love both the ministry of preaching and the ministry to people. He began to read the Puritans and the Reformers, and this strengthened and deepened his theological convictions. He also soon developed the ministry that has far outlasted him—the ministry of writing. Over the course of his life he wrote articles, tracts, books, and commentaries and saw these distributed around the world. Many of them survive as classics today: Expository Thoughts on the Gospels (with one volume dedicated to each of the four gospels), Thoughts For Young Men, and, mostly importantly, Holiness.

Having gained a national reputation, Ryle eventually became the first bishop of Liverpool and here he was often called to defend Evangelical beliefs against the encroachment of Catholicism and Liberalism. Well is this biography subtitled “Prepared to Stand Alone” for Ryle often found himself forced to take unpopular and solitary stands for the truth. This difficulty combined with the loss of two wives, the death of a child, and the growing apostasy of a son left him a man marked deeply by suffering.

Murray provides an account of Ryle’s life and follows with three ways Ryle can speak into today’s Evangelicalism: through his understanding that man exists from God and to the glory of God, that the gospel only shines in contrast to the law, and that the great purpose of redemption is to praise God for his grace. All three of these were prominent themes in his life, his pastoring, his preaching, and his writing. Two appendices add value, the first by sharing powerful excerpts from Ryle’s writing and the second by providing a comparative account of the life of his son, Herbert, who was also a theologian, but one who got swept up in the spirit of the age. “To follow the thinking of Herbert Ryle is to be led not only into the extent of the difference between father and son but right into the great change then taking place among leaders of the churches.” It is for good reason that the father’s legacy has survived while his son’s has been forgotten.

I have invariably been blessed by my forays into Ryle’s works. His Expository Thoughts on the Gospels never fail to provide succinct summaries of truth along with pointed application; his Holiness proved its place as a classic by inspiring a greater desire to be holy even as God himself is holy. Having read this biography, I find myself increasingly eager to discover his other treasures.

Iain Murray has done us a great service in returning to our consciousness the life and legacy of this stalwart defender of the Christian faith. If ever we needed an example of a man who was prepared to stand alone—alone on biblical truth and principle—it is today. In that way, though he is dead, Ryle still speaks.