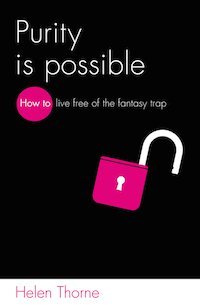 I am often asked where the Christian book market is lacking. While there are certain topics that have been addressed by a multitude of good books (e.g. prayer, marriage, evangelism) there must be a few that have yet to receive substantial attention. For a long time I have pointed to the lack of good books on sexual purity that are targeted at women. Thankfully, Christian publishers are beginning to address the issue, and to address it well.

We all know that we live in an increasingly pornified culture, where what was once shockingly pornographic is now considered humdrum and hardly worthy of comment. We all know that pornography is a plague that has effected an entire generation of young men. But all the attention focused on men may mask the fact that many women struggle as well. Some studies suggest as many as one in five women regularly access pornography; The Fifty Shades of Grey phenomenon showed that women are eager to buy and read erotica. Yet, while lust is an equal-opportunity sin, the great majority of resources are directed at men.

New from author Helen Thorne is Purity Is Possible: How to Live Free of the Fantasy Trap. This book addresses fantasy, erotica and pornography, and does so from a female perspective. Thorne is transparent (but not vulgar) in describing her own struggles with lust and in sharing how she has gained increased victory over the sin. She writes in a friendly and conversational tone, inviting the readers to join her arm-in-arm as they pursue purity together.

There is a rumor going around that women don’t watch online sex. There’s a school of thought that says that our fantasies are romantic rather than explicit. Some argue that we don’t think as visually as men, so pornography is rarely appealing. A few believe that we are, by nature, more pure and innocent.

I wish the rumors were right. They’re not. Not in my experience, and not in the experience of most women I know.

But there’s another rumor going around… That there is a way out. That, in Jesus, God offers forgiveness and change.

I’m so glad that rumor is true; that it can be the experience of any and everyone.

Purity is possible, and Thorne shows from God’s Word just how it is possible.

One strength of Thorne’s work is that she carefully addresses the heart and not merely the outward behavior. When it comes to sexual sin or any other sin that is manifested outwardly, it is so easy to fixate on behavior modification. But she coaches the reader in examining her heart, and learning the deeper sin problem that is causing her to act out lustfully. She deals well with true repentance, pointing out the difference between tears that flow out of shame and tears that flow out of a true desire to repent. “You can’t cry guilt away. You need to give it away.”

For one reason or another there continues to be far more stigma attached to a woman’s struggle with purity than a man’s. Because the social cost is higher, admitting the struggle and crying out for help becomes that much more difficult. I trust that through this book and others we will be able to admit together that lust is not only an issue that men struggle with. I trust that this book can help many women admit their struggle, battle their sin, and find true victory over it.

Purity Is Possible is available at Amazon or The Good Book Co.