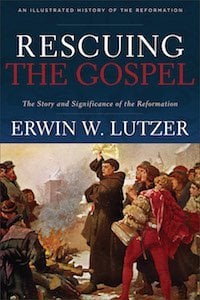 Next year will mark 500 years since Martin Luther nailed his 95 theses to the door of that cathedral in Wittenberg. Little did he know that in that simple act he was altering the course of history. The principled stand he took that day would pit him against the Roman Catholic Church, its pope, and its hierarchy. He would soon come to understand that the gospel of Jesus Christ actually needed to be rescued from the Church. This is the tale Erwin Lutzer tells in his new book Rescuing the Gospel: The Story and Significance of the Reformation.

The focus of Lutzer’s work is the life and impact of Martin Luther, but he also gives attention to the forerunners of the Reformation, John Wycliffe and John Hus, and the most prominent of the Reformers who followed Luther: Zwingli, Calvin, and the Anabaptists. “Thank you for joining me on this important journey,” he says. “We’ll visit Wittenberg, Worms, Erfurt, Geneva, and Zurich. We’ll walk through cathedrals, listen to a sermon in a town square, and meet some people whose intellect and courage shook the world. We’ll listen to a story of courage and cowardice, of betrayal and faith. And when we are finished, we’ll understand ourselves—and our society—much better. Best of all, new appreciation for the one message that can actually change the world will burn within us.”

Let me highlight what I see as four particular strengths of Rescuing the Gospel.

The first is Lutzer’s telling of the context and unfolding of the Reformation. What could easily be a dry subject is made riveting through his skill with the pen, his passion for the subject matter, and the many and varied full-color illustrations. “How easy it is to forget that we are heirs of a rich history that began with the New Testament and continues on to this present day. To study church history is to study the ways of God; it is to appreciate His providential guidance of his people.”

A second strength of this work is its relevance to today’s world, and especially to today’s church. As indicated in the book’s subtitle, Lutzer’s interest is not only in the story of the Reformation, but also in its significance. While the events of the Reformation are firmly grounded in history, its impact lives on not only in the church but also far outside it. The Reformation really did change the world and that becomes apparent through this narrative. “We forget that the better we understand yesterday, the better we will understand today.” He is exactly right. We live best in our day and prepare ourselves to live best in the days to come when we understand our shared history.

A third strength is Lutzer’s evaluation of the most prominent characters of the Reformation. While he gives credit where credit is due, he also attempts to be fair and to evaluate their weaknesses. He evaluates Luther’s infamous statements about Jews and peasants, he tells of Calvin’s role in the death of Servetus, and describes the excesses of some Anabaptists. He shows that even the best and most prominent of men are but men, stained by sin and sometimes very grievous sin. “By the end of our journey,” he promises, “we’ll be encouraged to learn that God uses imperfect people in His work. We’ll marvel at Luther’s courage and be bewildered by his anger and personal vendettas. We’ll be impressed with John Calvin’s mind and yet question his wisdom in agreeing with the decision of the Geneva city council to have the heretic Michael Servetus burned at the stake. We’ll be deeply disappointed in Zwingli for agreeing with the Zurich city council that those who rejected the doctrine of infant baptism (and therefore baptized one another as believers) should be put to death.”

A fourth strength is the final chapter which asks and answers a pressing question: Is the Reformation over? Here Lutzer shows that the issues that divided Protestantism from Catholicism at the time of the Reformation remain pressing issues today. The Catholic Church has not only maintained many of its most odious beliefs, but has actually strengthened them. Lutzer points to unbiblical views about transubstantiation, indulgences, and sainthood as examples while also expressing concern about the thread of superstition that runs through Roman Catholic faith and worship. “As for Pope Francis, he wrote only one book before he was elevated to the papacy, titled The History of the Jesuits. In it he says that the Reformation is the root of all the evils in the Western world. Yet, today he is courting evangelicals so that they might become ‘evangelical Catholics.’ History shows that they will be added to the church but not permitted to reform it.” What was true in 1517 is true today: “We must rescue the gospel from Catholicism along with a host of other movements…”

Rescuing the Gospel is an excellent introduction to the Reformation—easily one of the best I’ve read. It is an introduction that is fair to the diversity of Protestantism, and this is indicated in the breadth of those who have offered their endorsements for it: Joel Beeke (Dutch Reformed), Al Mohler (Reformed Baptist), Burk Parsons (Presbyterian), and John Warwick Montgomery (Lutheran) among others. It accomplishes exactly what it promises, delivering a riveting account of the Reformation and an explanation of why it matters today. I highly recommend it.