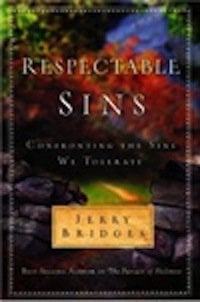 Confronting the Sins We Tolerate

Become a Patron
A new book from the pen of Jerry Bridges is always a noteworthy event and this month we’re blessed to see not one, but two new books bearing his name. The first of these, published by NavPress, is titled Respectable Sins. “The motivation for this book stems from a growing conviction that those of us whom I call conservative evangelicals may have become so preoccupied with some of the major sins of society around us that we have lost sight of the need to deal with our own more ‘refined’ or subtle sins.” And in the book Bridges addresses these “respectable sins”–sins, that though they bring dishonor to God, are too often overlooked among Christians. We are apt to focus on the obvious ills of society and our attention to those seemingly great sins somehow convinces us that our small sins are acceptable.

Bridges begins this book, as he usually does, by laying the foundation of the gospel. He addresses the Bible’s continual exhortations that we are to “be what we are.” We are called saints and are expected by God to act like those who have been set apart to be holy. We are to act like a people who have been separated unto God. While the Bible makes it clear that any conduct unbecoming a saint is sin, and while all Christians acknowledge that we do sin, we are still prone to ignoring certain transgressions that simply do not seem that serious. “We can readily identify sin in the immoral or unethical conduct of people in society at large. But we often fail to see it in what I call the ‘acceptable sins of the saints.’ In effect, we, like society at large, live in denial of our sin.”

All sin, no matter how subtle it may seem to us, is malignant. It “wages war against our souls.” Some subtle sins we commit without really thinking about them, either at the time or afterward. “We often live in unconscious denial of our ‘acceptable sins.'” But even these sins are “an assault on the majesty and sovereign rule of God. It is indeed cosmic treason.” But, in His sovereign good pleasure, God has graciously provided a remedy for sin in the death and resurrection of Jesus Christ. After discussing the ramifications of Jesus’ sacrifice on our behalf, Bridges transitions to a word about the power of the Holy Spirit, teaching how He works in and with us to cleanse us from our sin.

And here, after about fifty pages of important introductory material, Bridges begins to discuss individual sins he has identified in his own life and in the lives of other believers. Here is the list:

Each one of these is discussed in some detail: how the sin can be identified, how it dishonors God, how it affects a Christian’s life, and what Scriptures we can use to overcome it. He encourages the reader to go slowly from chapter-to-chapter, pausing to meditate on the Scriptures he provides and seeking to allow them to challenge and, if necessary, to convict. The person who reads the book quickly will be rewarded, but the one who reads it slowly and meditatively will surely be rewarded more.

Jerry Bridges has long served the church in the area of applying the gospel to personal holiness, using the Word to convict of sin and the gospel to restore hope. This book is a welcome addition to his already powerful list of books. The respectable sins he outlines I could often identify in my own life as ones that I have been willing to overlook. I suspect the same will be true of any Christian who takes the time to read it. This book is built upon a simple premise and Bridges executes it powerfully. I don’t know of any Christian would not benefit from reading it and from considering those subtle, dangerous, respectable sins.