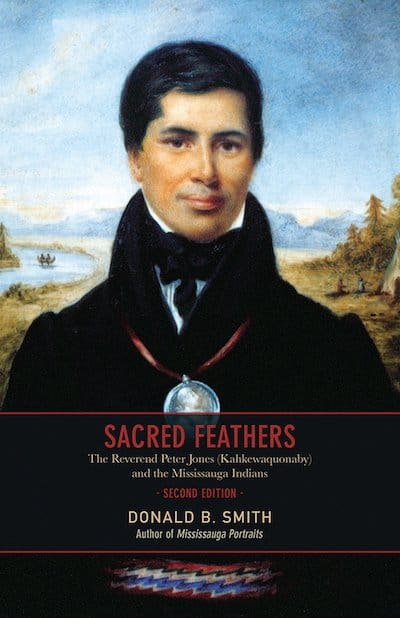 I have spent the great majority of my life on the western side of the Greater Toronto Area. In grade school my family moved to Ancaster and I soon went to school in Hamilton and got a job in Burlington; when Aileen and I married we moved to Brantford, then on to Dundas. My first job took us to Oakville where we remain to this day. I studied history in grade school, high school, and university, yet until recently had somehow missed out entirely on one of the most fascinating characters to ever spring from this area. His name is Kahkewaquonaby (which means “sacred feathers”) and he was the first (and perhaps last) great Ojibwa preacher. The special focus of his long ministry was his fellow Native Canadians, and among them he saw stunning results. This is a side of the history of Canada and the history of the Native people of Canada I’m thrilled to learn. It’s told powerfully and skillfully in Sacred Feathers: The Reverend Peter Jones (Kahkewaquonaby) and the Mississauga Indians.

Kahkewaquonaby, or Peter Jones by his English name, was born on Burlington Heights on January 1, 1802. His mother was of the Mississauga tribe while his father was a white American who had settled nearby. Like many men of the era, this man had two families, one in the settled country and one in the bush. He eventually chose to abandon one in favor of the other so that Peter was raised primarily by his mother, which meant he was raised according to Mississauga traditions and culture. But, then, when he was in his young teens, his father reappeared and began to teach his son to be literate, to farm, and to survive in the new world that was steadily encroaching on the Native way of life. In this way Jones was raised to understand two different worlds and to thrive in them both.

At the age of 21 he was invited to attend a Methodist camp meeting in Ancaster and there he heard and responded to the gospel of Jesus Christ. He would later describe his experience in this way:

That very instant my burden was removed, joy unspeakable filled my heart, and I could say “Abba Father.” The love of God being now shed abroad in my heart, I loved Him intensely, and praised Him in the midst of the people. Every thing now appeared in a new light, and all the works of God seemed to unite with me in uttering the praises of the Lord. The people, the trees of the woods, the gentle winds, the warbling notes of the birds, and the approaching sun, all declared the power and goodness of the Great Spirit. And what was I that I should not raise my voice in giving glory to God, who had done such great things for me!

My heart was now drawn out in love and compassion for all people, especially for my parents, brothers, sisters, and countrymen, for whose conversion I prayed, that they might also find this great salvation. I now believed with all my heart in God the Father, Son, and Holy Ghost, and gladly renounced the world, the flesh, and the devil. I cannot describe my feelings at this time. I was a wonder to myself. Oh, the goodness of God in giving His only begotten Son to die for me, and thus to make me His child by the Spirit of adoption. May I never forget the great things He has done for me on the glorious morning of the 5th of June, 1823!

He never did forget these great things and, in fact, dedicated his life to telling others how Christ could do the same for them. The nearby ministers and missionaries realized he had the ability to communicate to his fellow Ojibwa in a way they could not and encouraged him to be a missionary to his own people. He began to study the Bible and to preach and soon saw great numbers of his people come to faith. He traveled across Upper Canada and into America and met with great success in almost every place. He was a pillar of early Canadian Methodism for his preaching, his hymns, and his Bible translations.

As he rose in prominence, he was grieved to see white settlers continually encroaching on Native land. Though he maintained his ultimate concerns for the souls of his people, he also began to battle for their rights to land and education. He became convinced that for his people to thrive, they must adapt. He determined that their survival depended upon giving up their old seasonal migratory patterns to instead become settled farmers. A piece of land was allotted to the tribe and they settled along the Credit River where they founded a village and began farms (on what is currently Mississauga Golf and Country Club). This soon became a thriving, harmonious, model community, despite the consensus of the nearby whites that Indians could simply never learn to settle or be successful at farming.

As Jones traveled he founded missions and churches and quickly found himself in need of money to support this work. He was invited to England where he preached before crowds of hundreds and even thousands, raising funds to further the ministry in Canada. Along the way he met Eliza Field, a well-to-do young English woman and parishionier of Roland Hill. She would give up privilege in England to marry this man and settle into the New World as his wife. She loved Peter, believed deeply in his mission, and committed herself to it. She would become his dearest friend and most faithful ally for the rest of his life.

Jones lived out the rest of his days battling for the souls of his people but also battling for their rights. He met with far more success in the former than the latter and eventually he and his people were all but forced to migrate to the town of Brantford, and this despite his audiences with a host of prominent leaders and politicians, including two British monarchs. His biographer summarizes his impact in this way: “Peter Jones lived in a period of oppression for Canada’s native peoples, at a time when the Indians of present-day southern Ontario had lost their equality with whites. Without consultation the newcomers had begun to determine the original inhabitants’ future. For three decades Peter Jones fought back: to obtain a secure title to the reserves, a viable economic land base for each band, a first-class system of education, and Indian self-government. The white politicians largely ignored him.”

Though the hearts of politicians may have been hard, the hearts of his people were soft, and the great legacy of Peter Jones is not in rights secured but in souls saved. Well, then, did his wife describe his final moments. “As I tried to trace [his soul’s] progress, methought I heard shouts of victory resound through the vaults of New Jerusalem, as the redeemed Indian bands hailed with a fresh song of triumph the Benefactor of their race, the friend of suffering humanity; and the adorable Savior who had prepared for him a seat in glory, purchased with his own precious blood, bid him welcome with the plaudit, ‘Well done, good and faithful servant, enter thou into the joy of thy Lord.’”

Sacred Feathers has immediately become one of my favorite biographies and one I commend to you. Read it and meet a man, a brother in Christ, who deserves to be known. Read it and be encouraged.