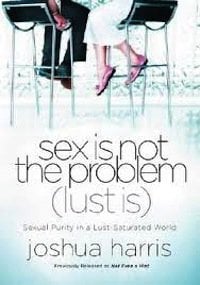 Buy from Amazon
Two of the first books I ever reviewed dealt with the topic of sexual purity. One of these books, Every Man’s Battle by Steve Arterburn, stands out in my mind and the review I wrote continues to generate emails even several years later. The main teaching of his book is the concept of “bouncing” the eyes. What this means is that when a man sees something that is sexually tempting he is to immediately divert his eyes. The authors state that most men, after six weeks of doing this, will make it a habit and will no longer struggle with lust the way they once did. Their eyes will naturally bounce away from objects they once found alluring. When men stop filling their minds with lustful images, they can then learn to control their thoughts and stop the cycle of sexual fantasy. This is exactly the kind of solution people love to find in a book of this nature. It is a simple plan and one that depends largely on the willpower of the individual. Sadly, though, it is a plan that has little to do with the centrality of the gospel in the life of the believer. I recently heard that Arterburn has been divorced twice and is now married to a woman he met at one his purity seminars. As I think back to the book he wrote, and as I ponder the news of his own struggles, I can see the tragedy of attempting to conquer lust through focusing on what a person can do through his own power. Guilt for sins committed and a desire to change are not enough to create lasting change.

I have read relatively little on the topic since Every Man’s Battle. Truthfully, much of what has been written follows the same pattern as Arterburn’s book, pointing to dependency on oneself in waging the war against lust. But, having received a copy of Josh Harris’ Sex is not the Problem (Lust Is) (previously released as Not Even a Hint), I decided I would dive into the topic once more. And this time I was rewarded.

Before I discuss this book, it bears mention that it is rated PG. This is a book that any adult or teenager should be able to read. Unlike some other books in this genre, it does not contain the graphic descriptions that tend to fuel lust rather than combat it. It will not, as Harris says, drag the reader’s imagination through the gutter. I should also mention that this is a book intended for both men and women. Harris does not allow women off the hook, assuming that they do not deal with issues of lust. While he affirms that men and women experience lust differently, he teaches that both men and women are susceptible to this and both genders need to deal with it.

So what is lust? Simply enough, “Lust is craving sexually what God has forbidden.” While sexual desire is good and natural, and given by God, lust is a perversion of what is good and right. “Lust goes beyond attraction, and appreciation of beauty, or even a healthy desire for sex–it makes these desires more important than God. Lust wants to go outside God’s guidelines to find satisfaction.” While lust is a problem that is as old as the human race, we live in a time when it is funnelled to us in ever-increasing measure. It is increasingly difficult to live pure and undefiled in our sex-saturated culture. And yet God’s standard remains the same: He demands perfection. “God calls us to the daunting standard of not even a hint.” The fact that this standard seems impossible is merely proof that man-centered solutions must fail. “Only the victory of Christ’s death and resurrection can provide the right power and the right motive needed to change me.” We must be motivated by God’s grace and empowered by the Spirit if we are to defeat lust.

Harris goes on to discuss the gospel. And this is what I love most about this book. Rather than moving from identifying the problem to planning out the solution, Harris pauses at the gospel–he pauses at the source of the solution. In a couple of chapters that seem they could as easily have been written by C.J. Mahaney or Jerry Bridges, he celebrates the gospel and the sacrifice of Jesus Christ. “We can’t save ourselves and we can’t change ourselves. Only faith in Christ can rescue us from the prison of our sin. And only the Spirit can transform us. Our job is to invite His work, participate with it, and submit more and more of our thoughts, actions, and desires to Him.”

Harris then wades into the thick of the battle, discussing the issues and offering strategies for long-term change. He discusses the types of issues we would expect him to tackle: masturbation, media, accountability and so on. The best and clearest solution offered, though surely the one that seems least attractive to the carnal mind, is memorizing Scripture passages most relevant to our particular temptations. A chapter at the end briefly discusses the Internet and tips for fighting against succumbing to the temptations of Internet pornography. Through it all, Harris speaks honestly and candidly, even holding out events and experiences from his life that must cause him a good bit of embarrassment. He is willing to admit his own weaknesses and failures in order to help others tackle theirs.

Ultimately, this book leads to the biblical (but still surprising) conclusion that, despite the allure of lust and the pleasures it seems to offer, there is far greater pleasure to be found in holiness. The pleasure and freedom of holiness is so much greater, so much truer, than carnal delights. “Remember,” Harris says, “God doesn’t call you to sacrifice as an end in itself. He calls you through it. On the other side of sacrifice is unspeakable beauty and indescribable joy. It’s not easy, but it’s worth every minute.” He holds out no easy, magical solution to defeat lust. Rather, lust’s power will decrease as we relentlessly pursue holiness.

Unlike so many books that share a shelf with this one at the local Christian bookstore, Harris holds out lust as a problem, but provides the gospel as a solution. And that isn’t even a fair fight. An excellent little book that is easy to read, easy to digest, and suitable for all audiences, I recommend Sex is not the Problem (Lust Is) without hesitation.