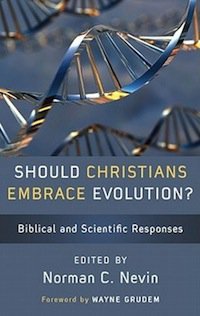 Buy from Amazon Buy from WTS Bookstore
Should Christians embrace evolution? It is an increasingly urgent question and one that seems increasingly difficult to answer. Like you, I have grown accustomed to hearing Christians declare that, in the end, it doesn’t really matter a whole lot what you believe about creation, whether you embrace a literal six-day creation or a version that allows for some kind of evolution. If only it was that simple. The fact is that there are many other doctrines that lean heavily upon the doctrine of creation. As this one topples and falls, many other crumble along side it.

Just a couple of weeks ago WORLD magazine declared Should Christians Embrace Evolution? their book of the year for 2011. I received the book just days after and eagerly opened it up to see what the fuss was all about. What I found is a book that offers a series of biblical and scientific responses to the question of evolution. Edited by Norman Nevin, the chapters are written by a list of distinguished scientists and theologians.

What the book demonstrates above all, and what it demonstrates especially in the first half, is that there is far more to the issue of creation than merely whether the world was created in six days or six billion years. This doctrine of creation provides a foundation for many others. As we let go of a literal six-day creation, we find many other critical doctrines are in danger of falling with it. For example:

This is merely a sampling. The fact is that creation does not stand alone within the Bible; there is much that hinges upon it.

The book’s second half turns to questions related to science and looks to homology; the nature of the fossil record; chromosomal fusion and common ancestry; information and thermodynamics; and other topics. Essentially, this portion of the book shows that those who hold to a young earth do not have to check their brains at the door. It is possible to be an intellectually-fulfilled six-day creationist (something Al Mohler has also demonstrated in this conference talk).

Putting the two halves together, we have a book that can be read through or that can be used for reference, to address specific concerns. It is a book to be read by six-day creationists who are eager to confirm what they believe and it is a book to be read by those who doubt six-day creationism or who have turned from it all together. Even if such people are not convinced by the arguments, at the very least they will find the debate framed in an honest and compelling way. It will show them the questions they need to be willing and able to answer if they are to remain faithful to Scripture.

Perhaps the golden quote in the book is this one: “Every generation of Christianity has its own stigma by which the believer’s faith is severly tested.” It seems increasingly clear that evolution is the great test of the early twenty-first century. We are being tested to see if we will capitulate, if we will feel shame, if we will allow the world to transform the church. Really, this is a test to see whether we will allow the Bible to be the norming norm, the ultimate source of truth that takes precedent over all others, or whether we will prioritize our own understanding of God’s natural revelation. This book asks all the right questions and, as far as I can see, answers them faithfully. I highly recommend you keep a copy of it handy.