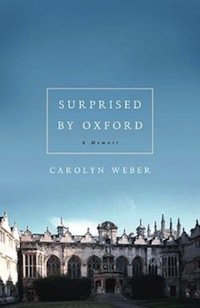 Buy from Amazon
When Carolyn Weber arrived at Oxford University to begin her post-graduate studies, she felt no need for God and had no interest in him. An intelligent young woman who had grown up in a nominal Roman Catholic family, she was glad to rely on her intellect for the answers to life’s greatest questions. As a blooming academic, she had few mentors or models who could show that faith is not only compatible with intellectual pursuits, but that it actually enhances them.

But the Lord had plans for Weber. Soon after arriving on campus she met a young man who shared the gospel message with her and, as she came to learn, once you have heard that message you cannot unhear it. The message resounded in her heart and mind. She spent 2 terms pondering that message, learning more about it, fighting against it, reading the Bible and engaging in conversation with anyone who would speak to her. She knew that the Lord was pursuing her and she eventually began to pursue him in return.

This tale is described in Surprised by Oxford, Weber’s newly-published memoir. The quirky setting for this pursuit, this love story, is the ancient campus of Oxford University. The structure follows Oxford’s academic year and its 3 terms, Michaelmas, Hilary and Trinity. There are 3 dimensions to this love story—love for Oxford, love for a young man, and love for a Savior. The three are interwoven and inseparable; each one is fascinating.

As we might expect from a person who has dedicated her life to the study of literature, Weber is a capable writer and more than capable, really. As much as I enjoyed the story, it is the writing that truly gripped me. There were moments that I had to stop reading for a time and just ponder the beauty of well-formed sentences and perfectly-chosen words. Here is a brief excerpt in which Weber visits a local church so she can borrow one of its Bibles.

A sea of pews greeted me, each with a Bible and a hymnal tucked neatly inside every few feet. I could sit anywhere and have my pick, easily within reach.

I thought at first that I could discreetly take one, or rather borrow one, and no one would notice. But then I thought better. Reading from a stolen Bible? Something in that seemed a little coarse, even for a cynic like me. So instead I made my way to one of the back pews and sat down, irreverently crossing my ankles on the genuflecting cushion and resting my coffee on the handy little shelf for the welcome cards. I opened a Bible and began at the beginning, a very good place to start.

Before I knew it, stealthily entering St. Mary’s by the side door with my morning coffee became something of a ritual for me. The church always owned a particular hush during the rush of a weekday. Sometimes I would return late in the evenings, too, after the Bodleian closed. I would step out of the chill into the candle glow. I enjoyed the peace, the solitude, the seeming transgression.

Purchasing my own Bible seemed too much of a commitment, like getting married. Besides, the church was right across the street from my college, so, as they say, why purchase the cow when you can get the milk for free? I began coming more and more often.

Lilies in the field, a house with many mansions, the command to love one another—familiar echoes from an unfamiliar context. Seeds planted but nothing, really, I thought, to reap.

In this back pew I read the Bible steadily on borrowed pages. I devoured it, just as a best-selling book (which, coincidentally, it always has been). Even the long, monotonous lists. Even the really weird stuff, most of it so unbelievable as to only be true. I have to say I found it the most compelling piece of creative nonfiction I had ever read. If I sat around for thousands of years, I could never come up with what it proposes, let along with how intricately Genesis unfolds toward Revelation. That the supposed Creator of the entire universe became a vulnerable baby, born in straw, to a poor girl who claimed to be a virgin, and who was betrothed to a guy probably scared out of his wits, but who stood by her anyway. It unwinds and recasts the world and our perception of it: that the Holy Grail is more likely to be the wooden cup of a carpenter than the golden chalice of kings.

No wonder this stuff causes war, I thought as I read, between nations and within each of us.

It’s important to note that this is not a memoir of coming from darkness to fully-formed five-point Calvinism (or five-point Arminianism, for that). And that’s okay. Weber battles through the authority of the Bible, the person and work of Jesus, the ways in which her feminist worldview had shaped her perception of God and on and on. She covers a lot of ground here. There is consistently war between what she wants to believe and what she knows she needs to believe. More interesting than anything else may be her growing submission to the Lord, often at some personal cost.

When I began reading Surprised by Oxford I considered the title a weak one. But as I read it, and as the story began to reveal itself, the title began to make a lot more sense. It began to fit. Weber really was surprised by Oxford. As Jim Belcher writes in his endorsement of the book, “She didn’t come to Oxford University to think about God, but in the end she discovered that He was thinking about her; and this reality changed her life.” That was a surprise, indeed.

Quite needless to say, I thoroughly enjoyed this book. I never tire of reading how the Lord draws people to himself and I found Weber’s story particularly compelling in its warmth, its wit and its uniqueness.