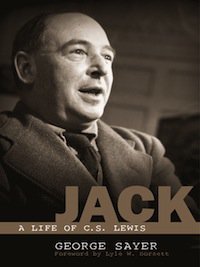 Buy from Amazon
I have often expressed my love of biographies. I consider them to be among the most helpful of resources in helping equip Christians in their lifelong quest for Christ-likeness. We can learn much from the examples of those who have run the race before us. We can learn from what God taught them, learn from their triumphs and learn from the times they were defeated. I have a passion for biographies. I also have a passion for the English language. I love to see how we can use the language to craft works of art. I cannot express myself in the fine arts – music and art are both disciplines that escape me. But I consider myself a wordsmith-in-training. These two loves come together in Jack, a biography of C.S. Lewis written by a veritable master of the English language.

George Sayer had what was probably a unique privilege – he met C.S. Lewis and J.R.R. Tolkien at the same time. He studied English under the tutelage of both of these men while at Oxford University. He became friends with Lewis, growing closer as they grew older. As a friend he provides a unique perspective on what is surely a unique individual.

I have never had the interest in and respect for C.S. Lewis that so many Christians afford him. Perhaps it is that I tend to see in black and white. Lewis exemplified some of the best and yet some of the worst in his understanding of Christianity. It seems that for every major doctrine he so brilliantly defended, there was another that he denied. For every brilliant insight there is a terrible oversight.

Jack provides a glimpse into Lewis’ life. This, combined with penetrating analysis from one who knew him well, makes this biography not only fascinating, but very credible. Sayer covers all of the foundational parts of Lewis’ life – the death of his mother, his education, his infatuation with Mrs. Moore and his conversion to Christianity. The author looks also at most of Lewis’ major writings. Having spent so much time with his subject, Sayer is even able to describe an average day in the life of C.S. Lewis – just the type of detail that is interesting, but is absent from most biographies.

Thoroughly-researched and exquisitely-written, this is a brilliant biography of a figure whose importance to Christianity seems to be growing, even forty years after his death. With a major movie series coming to theatres beginning this year, we will surely hear a lot more about Lewis than ever before. While many biographies have been written about him, I would have trouble believing any could be better than this. No matter your opinion of the man himself, Jack, as a book, is a gem; a jewel; an absolute triumph.