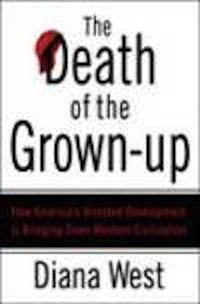 Buy from Amazon
Where have all the grown-ups gone? It’s a question that has perplexed me. Why is it that young people these days seem unwilling, or perhaps unable, to grow up? What is so attractive about youth, about perpetual adolescence, that is so attractive? My wife and I have discussed these things at length, trying to understand why so many of the young people we know (young people who are really not so young anymore) seem stuck. They are working on second or third college degrees; they are living at home with mom and dad, even into their thirties; they are looking at marriage only in their late twenties or early thirties. What is happening? When I was young I could hardly wait to pass through my teenage years so I could live life as an adult and in so doing I think I followed generations before me. What has happened since?

Diana West has asked the same questions and The Death of the Grown-Up is her attempt at an answer. A book that has generated no small response, it concludes that America is suffering from a case of arrested development and that this will, this must, bring down Western civilization. This is no small claim. Neither is it a popular one (as evidenced by a near 50/50 split in Amazon reviews between 1-star and 5-star reviews). But it is one West manages to legitimize.

It seems that one of the driving forces behind the death of the grown-up was the rise of the teenager. Before the 1940’s, the term teenager was unknown; before this period humans tended to fall into only two groups—children and adults. Exactly when a child transitioned to adult could vary, but what was clear was that there was no intermediate period. Furthermore, children, or those in their teen years, would seek to identify with adult culture—they would seek to behave like adults, to dress like adults, and to be taken seriously like adults. Today the tables have turned. “That was then. These days, of course, father and son dress more or less alike, from message-emblazoned t-shirts to chunky athletic shoes, both equally at ease in the baggy rumple of eternal summer camp. In the mature male, these trappings of adolescence have become more than a matter of comfort or style; they reveal a state of mind, a reflection of a personality that hasn’t fully developed, and doesn’t want to – or worse, doesn’t know how.”

It is teenagers who are respected and teenagers who are envied. Adults now seek to recapture youth and to return to their teen years. They dress like teens, think like teens and increasingly act like teens. This intermediate period between childhood and adulthood, this recent development, is being continually extended. Some organizations today go so far as to suggest that adolescence continues until age thirty. Some go further and suggest thirty-four. Thus a thirty-three year old man or woman should not truly be considered an adult. Any other generation would laugh at the mere suggestion.

After the idea of adolesence became popular, it took only a generation before popular culture, and particularly the medium of television, began to portray age as “square” and youth as “hip.” The dignity of age was replaced with disgust. Where children used to orbit around their parents, today the opposite is true. Parents orbit around their children, “abdicating their rights and privileges by deferring to the convenience and entertainment of the young.” No wonder, then, that people wish to avoid adulthood.

There are consequences to our disregard for maturity. “Even as age has been eliminated from the aging process, they have a hunch that society has stamped out more than gray hair, smile lines, and cellulite. What has also disappeared is an appreciation for what goes along with maturity: forebearance and honor, patience and responsibility, perspective and wisdom, sobriety, decorum, and manners—and the wisdom to know what is ‘appropriate,’ and when.”

Having laid a foundation for the death of the grown-up, West surveys a variety of topics, showing how they are contributing to the downfall of society or how they played a role in the rise of the adolescent. She looks to popular music and entertainment, to parents who need parents, and to a society that values excess rather than control. And then the book takes an unexpected turn. As she moves from the past to the future, West suggests why this matters so much; she turns to the consequences of the death of adulthood and the death of maturity. Focusing on the ideas of multiculturalism and political correctness, cultural forces she believes could only be accepted by an immature society that is willing to pretend that differences are non-existent and unimportant, she suggests that these leave us entirely unequipped to deal with the forces seeking to destroy us. And here she points primary to Islam and to terrorism. She writes about how our immature thinking leaves us unable to grapple with the reality of what we are facing in global Islam. Our society sits passively by, anaesthetized with movies, music, television and video games, while Islam plants deeper and deeper roots within.

The Death of the Grown-Up is a compelling book. While it is certainly not the only book examining the growth of adolescence, it is perhaps the most far-reaching and the most courageous in its analysis of where this will and must lead. If West is correct, our society needs to grow up and needs to do so before it is too late. Yet whether or not you find you agree with her prescription, only a person blind to the culture could disagree with her initial analysis. And on this basis alone this book is worth reading and enjoying. I recommend it to anyone with an interest in understanding the culture we find ourselves in.