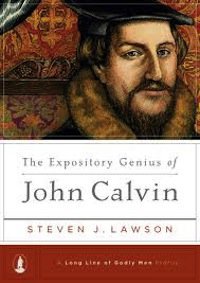 Buy from Amazon Buy from WTS Bookstore
Steven Lawson’s series called A Long Line of Godly Men has made me awfully excited. I love Reformed theology and am thrilled to see the effort Lawson is expending in proving that this theology, seen as so new and so radical by such a large number of Christians, has been consistently taught by courageous and biblical Christians from the time of the writers of the Bible all the way to today. There truly is a long line of godly men testifying to God’s sovereignty in these doctrines of grace. And someday I look forward to having a long line of these books on my shelf.

While the main series will encompass five volumes each measuring several hundred pages, there will also be a subseries known as “Long Line of Godly Men Profiles.” These books will narrow in on some of the most important figures in church history, attempting to show how they held to these doctrines. It also wieghs and measures the impact of these individuals in one particular area. As I understand it, future volumes will cover Martin Luther, Jonathan Edwards, Charles Spurgeon and other giants of the faith. Each volume will focus on a particular aspect of that person’s ministry and legacy. Preachers will be the key focus for, as Lawson says in his introduction, “I can think of no better discipline for preachers today, apart from the study of Scripture itself, than to examine the biblical exposition of spiritual giants from the past.” The first book in this series is The Expository Genius of John Calvin.

Affirming that to step into the pulpit is to enter onto holy ground, Lawson bemoans the fact that we live at a time when so many churches have compromised the sacred calling to preach. “Exposition is being replaced with entertainment, preaching with performances, doctrine with drama, and technology with theatrics. Desperately does the modern-day church need to recover its way and return to a pulpit that is Bible-based, Christ-centered, and life-changing.” The goal of the book is simply to allow others to see what a commitment to biblical preaching looks like in the life and ministry of a man who was sold out to this duty. For those who preach, this book ought to call you to a higher standard in handling the Word. If you are a supporter of one called to this ministry, the book will teach you how to pray for the one who teaches you.

The book begins, as we might expect, with a short biography of Calvin but quickly turns to his unsurpassed expository ability. Lawson discusses Calvin’s approach to the pulpit, his preparation, his introductions, his method of expounding the text, the way he crafted his delivery, his application of the truth and his concluding statements. In short, it examines each of the components that together formed his sermons. It focuses not only on function, but also on form.

The book is written in a way that is very logical, building around a consistent point-by-point framework as Lawson looks at 32 distinctives of Calvin’s preaching. And though the subject may appear to be dry, the book is easy to read and even enjoyable for a person like myself who does not preach. There is much we can all learn from the preaching ministry of John Calvin.

I agree with Lawson and so many others than expository preaching really is the need of the hour. The health of the church will begin with a healthy pulpit. A healthy pulpit is one from which the Word of God is faithfully and consistently preached. Those who wish to be better expositors of the Word should turn to the masters to learn how to improve their ability. John Calvin was one of these masters and one from whom all preachers can surely learn. Dr. Lawson’s brief book provides a fantastic introduction to Calvin’s ministry, not just in its impact but in its methodology. If this book portends what we can expect from this series (and this series within a series) it will be a landmark collection of books and I will eagerly anticipate the coming releases.