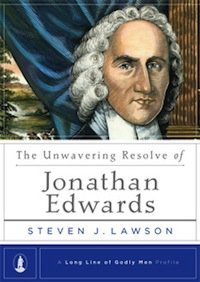 In 2006, Reformation Trust published Steven Lawson’s Foundations of Grace, the first volume in a promising series titled “A Long Line of Godly Men.” Though the original publication schedule called for a new book every year or two, the second volume, Pillars of Grace has been repeatedly pushed back and is now listed as a November 2009 release. However, while we’ve been awaiting that title, we’ve been treated to two volumes in a companion series called “A Long Line of Godly Men Profiles.” The first of these told of The Expository Genius of John Calvin while future releases promise to focus a spotlight on an aspect of the ministries of Martin Luther, George Whitefield, Charles Spurgeon, and other notable pastors and theologians. The most recent volume, the second in the series, looks to the “Unwavering Resolve of Jonathan Edwards.” These short biographical sketches look to only one aspect of what made the subject so great in his time and so mightily used by God.

“Considered the towering figure in American Colonial church history–arguably the greatest pastor, preacher, philosopher, theologian and author America has ever produced–Edwards lived with an enlarged desire to experience personal godliness. In this pursuit, he became a model of discipline worth of our emulation.” As a young man and a recent convert to the faith, Edwards drafted a list of seventy resolution, purpose statements that he carried with him throughout his life. These statements and his stubborn desire to keep them, shaped his life. “Here is the key,” says Lawson, “to his spiritual growth–Edwards disciplined himself for the purpose of godliness. He understood that growth in holiness is not a one-time act, but a lifelong pursuit, one that requires a daily determination to live according to the truths taught in Scripture. In accordance with his ‘Resolutions,’ Edwards consecrated himself in all things in order to glorify God and gain the incorruptible crown.”

Because those Resolutions so shaped Edwards’ life, Lawson uses them to structure this book. After a brief biographical sketch of Edwards, he introduces the Resolutions, grouping them under six main headings: Pursuing the Glory of God, Forsaking Sin, Making Proper Use of God-Allotted Time, Living with All His Being for the World, Pursuing Humility and Love and Making Frequent Self-Examination. As the book progresses, each of these headings becomes a chapter and in each chapter, Lawson discusses a few of the associated Resolutions. As he looks to Edwards’ life and legacy, he shows that Edwards is one of those men who belongs not just to his age, but to all time. “Edwards possessed a rare combination of Reformed theology, extraordinary giftedness, and fervent piety. However, it was this latter virtue–his true spirituality, marked by a fixed resolve–that positioned him to be used so mightily by God. Few have equaled his relentless pursuit of personal holiness. Edwards’ godliness fitted him to be the mighty instrument in the hand of God that he was.”

In the opening pages of The Unwavering Resolve of Jonathan Edwards, Lawson writes “The ultimate goal of this book is to challenge a new generation of believers to pursue holiness in their daily lives. My aim is to fix our sights on how we must be disciplined in this pursuit.” He achieves that goal well. Though short, this book offers a valuable survey of Edwards’ thought. The reader learns that what set Edwards apart was not necessarily an enlarged intellect or an abnormal family heritage, but rather an enlarged desire to submit his life to his Savior. This was his motivation and this was his joy: to bring glory to God.

Though we hardly suffer from a shortcoming of biographies of Edwards, this one finds a niche and fills it well. It would not be out-of-place in any collection.