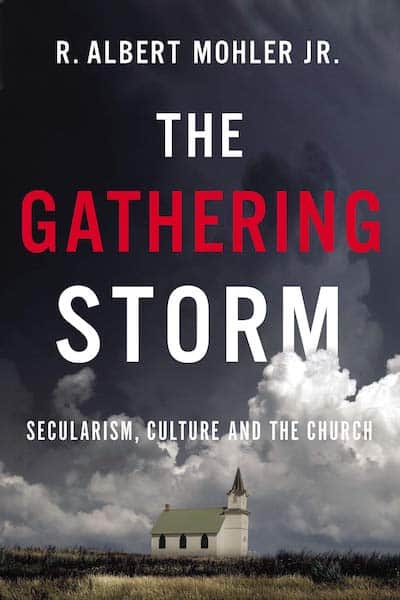 If you know much of anything about Albert Mohler, you’ll probably be quick to understand the title of his new book, The Gathering Storm. Mohler is a lifelong student of Winston Churchill and has borrowed the title from the first volume of Churchill’s massive work on the Second World War. However, he hasn’t merely borrowed the title, but also the central argument: “the first task of faithfulness lies in understanding reality. Understanding the storm and seeing it for what it is turns out to be a necessary first step.” But where Churchill was writing about the gathering storm of Naziism on the European continent, Mohler is focused on the gathering storm of secularism in Western society. Hence where Churchill’s book was summarized as “how the English-speaking peoples through their unwisdom, carelessness, and good nature allowed the wicked to return,” Mohler’s is subtitled “Secularism, Culture, and the Church.”

Through his books, writing, and daily The Briefing podcast, Mohler spends much of his life examining and interpreting the intersection of church and culture. He, like many others, is concerned about the increasing and increasingly-obvious secularization of the Western world though, as an American, the United States is his first and greatest interest. But as he shows, what happens elsewhere does impact America, for “Americans had long believed that we were an exceptional nation and that secularization was a European reality, not ours. We can afford that illusion no longer. America is on the same trajectory, just on a somewhat delayed timetable.” What may be in the advanced stages in some European nations is now well underway in the US of A.

So what is this “secularization” that so concerns him? “Scholars debate the term aggressively, but it points to a process that has been taking hold in modern societies since the dawn of the modern age. It does not mean that all people in these societies become truly secular, or irreligious, but it does mean that Christianity, which forged the moral and spiritual worldview of Western civilization, is being displaced. The society itself is progressively secularized.” This does not mean that the people in that society cast aside all vestiges of religion. To the contrary, many people continue to consider themselves spiritual or to have some loyalty to one religion or even tenets of many religions. “The key issue is that the society is distanced from Christian theism as the fundamental explanation of the world and as the moral structure of human society.” In other words, the Christian foundations of these nations is being contested, eroded, or willfully destroyed.

The purpose of Mohler’s book is to identify how secularization has impacted various parts of society. He wants Christians to see the reality of it, then to consider how to stand strong, how to exercise moral courage, and how to honor God as the storm gathers. “One of Winston Churchill’s great virtues was his ability to see the storm and then to summon the courage and conviction to go into the storm. That is the challenge faced by Christians in the United States today—to see the storm and to understand it, and then to demonstrate the courage to face the storm.”

And so he looks first at the storm generally as it gathers strength and begins to break over Western civilization. He traces it back through the Enlightenment and the modern age, and shows how it has now settled most deeply in the halls of academia. In the face of this encroachment he calls for Christian protest. “Rescue will not come by mere politics. We do not need a political movement. We need a theological protest. True Christianity and true gospel preaching depend on a firm commitment to the authority of Scripture. That is why, since the time of the Enlightenment, the inspiration, inerrancy, and authority of Scripture have been under constant attack. … The only way to escape the rationalist claims of modernism or the hermeneutical nihilism of postmodernism is the doctrine of revelation—a return to the doctrine of sola Scriptura.”

Following this foundational chapter, he narrows the focus through the follow chapters to a number of areas where the advance of secularism has been particularly and obviously advanced: the church and matters of human life, marriage, family, and gender. He then looks at the difference between the generations now fading and the generations now rising. He shows how the engines of culture are consistently pushing the most progressive, secularizing agendas, and he focuses on the growing and soon-coming issues of religious liberty.

Mohler concludes with a call for believers to go boldly into the storm. “We are now in a battle of ideas, and we will be in this battle until Jesus comes. But the example of Churchill has haunted me since I was very young and first came to consider his place in history and his prophetic role. I do not want to miss the storm that is gathering, and there can be no doubt that we are facing a gathering storm.” How can Christians be obedient to Christ in it? He proposes a solution that is both simple and profound: An emphasis on the transcendent Christian virtues of faith, hope, and love. He provides an extended call to understand and exemplify all three.

Al Mohler is a skilled and trustworthy interpreter of the times and The Gathering Storm comes in a context in which no one can doubt the existence or strength of the great winds of change that are sweeping over us all. His book, like Churchill’s, forces the reader to understand the reality and to understand the danger. But his book also offers gospel hope and distinctly Christian action. I hope and pray many read it and heed it.