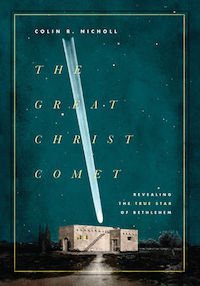 What do we do about that pesky star? Inseparable from the narrative of Jesus’ birth is the “star of wonder, star of night / Star with royal beauty bright” that we sing about in our Christmas carols (and, of course, read about in the book of Matthew). What was that star? Where did it come from? If it was so unusual and magnificent that it could lead wise men from the East all the way to Bethlehem, why don’t we read about it in other sources? That star is the subject of Colin Nicholl’s new book The Great Christ Comet. And, as you may surmise from the title, he does not believe it was a star at all.

Before I discuss the content of the book, let me say a few words about the volume itself. The Great Christ Comet is a beautiful work. It is a slightly oversized hardcover that is well-illustrated, holds all kinds of fascinating charts and drawings, and is a joy to read. It will prove a popular choice for a Christmas gift this year, I am sure, and deservedly so.

Over the years, the star of Bethlehem has been the subject of endless speculation. The most prevalent views have been that the star was the triple conjunction of Jupiter and Saturn in Pisces; that it was Jupiter; that it was a nova or supernova; or that it was a miraculous star created by God for the purpose. Colin Nicholl, a Bible scholar, determined that he would get to the bottom of this star, and found all of those options unsatisfying.

As a Biblical scholar with a high regard for the historical credentials of the Scripture text, I have felt constrained to leave my comfort zone and wade into the field of astronomy in order to follow up Biblical leads concerning the Star. Doing so has been stretching and uncomfortable at times, but has also been incredibly rewarding and invigorating. In this book I present the fruits of my research—what I believe is a decisive breakthrough in the quest for the historical Star of Bethlehem.

His desire to solve the mystery of the star led him deeper and deeper into the field of astronomy until he was able to satisfactorily reconcile it with the biblical account. “In this book I offer what I am convinced is the solution to the age-old mystery of the Star of Bethlehem. What I propose is rooted in careful consideration of the relevant Biblical material and is, I believe, able to explain everything said about the Star in a natural and compelling way and in harmony with current astronomical knowledge.”

His conclusion is that the Star of Bethlehem was actually a comet. The Bible allows such a position, as the word for “star” is wide enough to account for a comet; astronomy demands such a position, as there is no other satisfactory way to account for the phenomena the Bible describes. This conclusion comes only with painstaking work in both Bible scholarship and astronomy. Nichols slowly and methodically makes his case, beginning with the biblical evidence, and then looking to the heavens. He describes what comets are, shows how ancient people interpreted them, gives examples of great comets through history, and tells how and why they are sometimes visible from earth. He ultimately shows how a comet could have been a sign to Babylonian wise men, how it could have alerted them to the birth of a Messiah, and how it could have led them first to the city of Jerusalem and then to a single home in Bethlehem. But he goes further than that. He also ties in passages like Numbers 24:17, Isaiah 7:14 and 9:2, and Revelation 12:1–5 to show how they may just have predicted this very phenomenon.

Speaking personally, I found Nicholl’s evidence and conclusions quite compelling. He makes a strong case and provides abundant evidence. He makes it clear that he is not a mere enthusiast in either of his fields of expertise, but someone who has dedicated his life to careful research.

Yet I also came away with a slight sense of caution. I have only the most rudimentary knowledge of astronomy (I can find the moon on a clear night, but not much more than that) and am under-equipped to pass judgment on his conclusions. However, because he so carefully charts his journey and the evidence he has collected, I know it will not be long before others take up the challenge. I will be interested to see how his work is interpreted by those with more knowledge in the field.

With all that said, I found The Great Christ Comet a unique and uniquely interesting book. I am glad I read it, and freely recommend it to you.