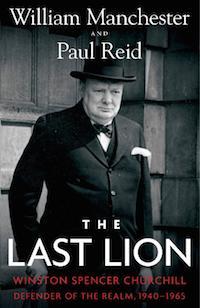 Well, at least I won’t go to the grave having accomplished nothing. After more than 130 hours of listening, I finally came to the end of William Manchester’s incredible three-volume biography of Winston Churchill (As you may know, Manchester grew ill and died before completing the third volume, leaving it in the capable hands of Paul Reid). It is a stunning achievement—over 3,000 pages of reading or 130 hours of audio, all focused on just one man. Few men merit such attention. Churchill practically demands it.

A couple of years ago I set out to read a biography of each one of the American presidents, a long-term reading project that is progressing quite well and will probably take ten or more years to complete. I found myself reading biographies of Roosevelt, Eisenhower, and Truman and realized that each of their lives intersected that of Winston Churchill; it seemed only right, then, that I would pause and cross the Atlantic for a time. I am so glad I did. (With my brain working the way it does, I paused after the second volume on Churchill to cross the channel and brush up on Hitler.)

Churchill is easily one of the most fascinating historical figures the world has ever known. He left an indelible mark on the world at a time when the entire globe was in utter turmoil. He was a Victorian man in the atomic age, a complex combination of utter self-confidence and pitiful yearning, rude and brusque to so many of those around him, yet kind and loving to the few who captured his affections. He was possessed of a uniquely brilliant mind, a razor-sharp wit, and an almost flawless memory. He was an ideas man, sometimes innovating in amazing ways and sometimes meddling in arrogant ways. He served his nation in several wars, sometimes from the front lines and sometimes from the command centers. His influence extended not only through his native land of England, but also to England’s colonies, her allies, and her enemies. There has never been anyone quite like him, and probably never will be again. No wonder, then, that his life can fill three long volumes.

Manchester’s work in the first two volumes is some of the best biography I have ever encountered. He begins with a long overview of Churchill’s life and a fascinating examination of the cultural context that could very nearly be a book unto itself. And then he simply introduces us to the man himself in exacting detail that somehow never grows even the least bit boring. I have often said there are biographies where you feel like you have learned about the subject, and biographies where you feel like you have met the subject; this work falls squarely in the latter category.

That said, the first two volumes in the series are appreciably better than the third. Reid is a capable author, but, by his own admission, he simply cannot match Manchester’s research, his pen, and his ability to introduce his subject. It’s not that the third volume is bad—not by any stretch. It’s more that the first two are sublime while the third is a little closer to ordinary. Still, far better that Manchester and Reid would collaborate on the final volume than allow it to go unwritten.

If you are an enthusiast of biography or simply have an interest in people who have left an indelible impression on our world, you will not do any better than this magisterial trilogy. It easily ranks as one of the best and most enjoyable biographies I have ever read.

The final words go to Lord Moran whose tribute to Churchill ended in this way: ““The vil­lage sta­tions on the way to Bladon were crowded with his coun­try­men, and at Bladon in a coun­try church­yard, in the still­ness of a win­ter evening, in the pres­ence of his fam­ily and a few friends, Winston Churchill was com­mit­ted to Eng­lish earth, which in his finest hour he had held inviolate.”