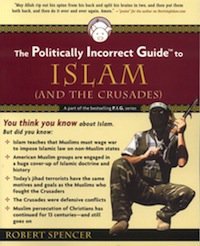 Buy from Amazon
“May Allah rip out his spine from his back and split his brains in two, and then put them both back, and then do it over and over again. Amen.” Such is the kind of “endorsement” garnered by The Politically Incorrect Guide to Islam and the Crusades. In this case, the endorsement was written by the Islamic web site, RevivingIslam.com. The author of this book, Robert Spencer, is the director of Jihad Watch and an Adjunct Fellow with the Free Congress Foundation. He has written several other books on the topic of Islam and, as per the brief biography within this title, “lives in a Secure, Undisclosed Location.” That is no doubt a wise precaution for a man who writes books and articles warning against the dangers of Islam.

The Politically Incorrect Guide to Islam and the Crusades is one of several titles in the P.I.G. series and is no doubt one of the least politically correct titles to carve a niche in the New York Times Bestseller list. This title seeks to show to the reader that almost everything he knows about Islam and the Crusades is wrong. Why? “Because most textbooks and popular history books are written by left-wing academics and Islam apologists who justify their contemporary political agendas with contrived historical ‘facts.’ But fear not: Robert Spencer refutes popular myths and reveals facts that you won’t be taught in school and will never hear on the evening news. He supplies a revealing list of ‘Books You’re Not Supposed To Read’ (as far as the PC left is concerned) and takes you on a fast-paced, politically incorrect tour of Islamic teaching and Crusades history that will give you all the information you need to understand the true nature of the global conflict America faces today” (from the back cover).

The book is comprised of three sections of uneven length. In the first, Spencer provides an overview of the Islamic religion. He introduces Muhammah and the Qur’an, and shows from Muslim holy texts and from historical evidence that Islam is a religion of war, intolerance and oppression. He also discusses many of the politically correct myths surrounding Islam. This all leads towards the conclusion that Islam is a religion that exists because of the sword and is spread by the sword. What was true of the religion over a millenium ago continues to be true today.

In the second section, Spencer discusses the Crusades, examines why they were called and debunks many of the myths surrounding them. He shows that they were, by and large, defensive actions and were not the holy wars of rape and conquest that the history texts make them out to be. He proves that Christianity and Islam are not equivalent religious traditions and deals with the myth, perpetuated even among Christians, that one of the major issues facing the world today is religious fundamentalism of all kinds.

The book concludes with several chapters discussing the current world situation as it pertains to Islam and jihad. He discusses “Islamophobia” and shows how the definition of the term, as with so many politically correct terms, allows almost a blanket prohibition of all meaningful examination and discussion of the religion and its effects on our culture. After looking at some of the recent national and international news stories that involve Islam, he provides several suggestions to the United States government. He calls for a “general recognition that we are already in a war between two vastly different ideas of how to govern states and order societies, and that in this struggle the West has nothing to apologize for and a great deal to defend. Indeed, the struggle against sharia is nothing less than a struggle for universal human rights, a concept that originated in the West and is denied by Islam. Everyone in the fractured and fractious West–Christians, Jews, and other religious believers, atheist humanists–ought to be able to agree that this is a concept worth defending, even if they disagree about its particulars” (page 224). He points out that what the United States is fighting today is not a war on terror, for terror is merely a tactic, not an opponent. The United States needs to focus on the actual enemy, not merely a tactic they happen to use with great effectiveness.

Spencer’s final reflection is worth pondering. “It’s time to say, ‘enough,’ and teach our children to take pride in their own heritage. To know that they have a culture and a history of which they can and should be grateful; that they are not the children and grandchildren of oppressors and villains; and that their homes and families are worth defending against those who want to take them away, and are willing to kill to do so. Call it a Crusade” (page 231).

Written in a fairly informal style and filled with asides and sidebars, much like the For Dummies series, The Politically Incorrect Guide to Islam and the Crusades is quite a good book and one that nearly anyone can read and understand. Judging by various statements throughout the book it would seem that the author is Roman Catholic and his bias seems to show through a few times. Still, he backs up almost all he writes with solid facts and avoids weak, reactionist arguments. This book is a solid introduction to the danger Islam poses to the West and it is well worth the read.