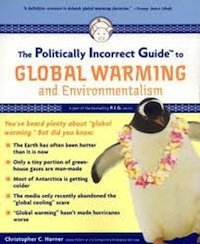 Buy from Amazon
“There are ominous signs that the Earth’s weather patterns have begun to change dramatically and that these changes may portend a drastic decline in food production–with serious political implications for just about every nation on earth. The drop in food production could begin quite soon. … The evidence in support of these predictions has now begun to accumulate so massively that meteorologists are hard-pressed to keep up with it.” The story is from Newsweek. The year was 1975 and the threat was global cooling. A year later the magazine reported that “this trend will reduce agricultural productivity for the rest of the century.” But then global cooling went out of style and Newsweek and other media outlets went on to discuss other topics. Three decades later the same overstatements and hysteria are being broadcast about global warming. I have read a good deal about this topic and even took the time to read Al Gore’s An Inconvenient Truth. As a fairly rational fellow, I thought it would be wise to look for dissenting views, for books that might strike a balance. To my surprise I found that very little had been written to refute the notion of global warming, and this despite knowing that many scientists are far from convinced. Eventually I stumbled across The Politically Incorrect Guide to Global Warming (and Environmentalism). This is the latest entry in the Politically Incorrect Guide series, a series that has already covered Islam, Intelligent Design, Feminism and other issues our society faces.

This guide is written by Christopher C. Horner. He is a senior fellow at the Competitive Enterprise Institute, an acknowledged expert on global warming legislation and regulation, and has spoken before Senate committees and the European Parliament. He seems fairly well qualified to write on the topic (especially when we consider that the main proponent of global warming is a politician whose college level science grades continue to be a source of embarrassment to him). Horner’s thesis is evident from the book’s opening lines. “Al Gore and his friends–social, corporate, and media elites, Europeans, and UN aficionados–declare ‘global warming’ an unprecedented global crisis. Hyped as an environmental nightmare, global warming hysteria is truly the environmentalist’s dream come true. It is the perfect storm of demons and perils, and the ideal scare campaign for those who would establish ‘global governance’ (Jacques Chirac’s words in praise of the Kyoto Protocol) with strict control over corporate actions and individual behavior.”

In the author’s opinion, global warming provides the perfect means of establishing global controls and global governance. It is inherently anti-capitalist and its pedigree is more red than green. “Environmental causes always include–and often are primarily–campaigns to gain more government control over the economy and individual activity. They are never fights for less control or greater liberty.” He goes on to attempt to prove this thesis through the first three chapters. From there he dedicates four chapters to refuting what he terms “the convenient lies”–the pillars of those who believe in global warming. He shows that climate is always changing so that the earth is always either getting warmer or colder, disputes the belief that humans are responsible for anything more than a fraction of the world’s carbon dioxide production, proves that there is anything but consensus among scientists about whether or not global warming is an imminent threat, shows that global warming is not an earth-wide phenomenon and how men like Al Gore have deliberately tampered with evidence showing this, and proves that humans have not caused the natural disasters that have recently stunned the world (with Hurricane Katrina being the one most fresh in people’s minds). From here he dedicates three chapters to “The False Prophets (and Real Profits) of Global Warming” and includes a full chapter to discussing Al Gore’s book and film. The final two chapters show the cost America would face if it bought into the alarmist agenda, and especially if it ratified the Kyoto Protocol. In short, he provides evidence that global warming is not the terrifying spectacle many people would have us believe and that we should be awfully careful before we buy into the hype.

Despite the complexity of the topic, I found that the author did quite a good job of making it understandable. There were a few spots where my eyes began to glaze over, but on the whole I enjoyed reading the book. The series’ trademark humor and “For Dummies” style helped get me through the tedious parts. Still, I had two complaints about the book. First, while it is obvious that the author is not “against” environmentalism as something less than a wide-ranging political ideology, it would have been nice to see him expend greater effort in affirming the necessity of caring for this world even if we do not buy into the hype. And second, the book could have used a bit more effort from the editorial crew. At times I almost felt that the book had bee rushed out the door in order to put it on store shelves while there is still a market for it. After all, if global warming follows the pattern of previous environmental hype, it will not be long before this book is relegated to the bargain bins. In fact, I hope this proves to be the case!

One thing this book helped me realize is just how complex a subject global warming is and how few people are truly qualified, trained and equipped to make the long-term predictions that are the source of so much hysteria. The book also reaffirmed what I already knew–that this issue simply cannot be separated from politics. There is clearly a great deal of ideology and politics underlying the hysteria. If we seek to know who is behind the hysteria, it seems to me that we need only follow the money trail. If the hysteria continues and nations like Canada and the United States buy into it, countless billions of dollars will leave North America and make their way to Europe, China and other countries that, despite being dependent on America, despise her. Someone is set to benefit from all of this hype. While I do not necessarily know who this person will be, I do know that it is not going to be the average North American consumer. You and I have a lot to lose and we ought to be sure we at least investigate the claims of those who are currently marketing the hype. The proposed “cures” for global warming are unbelievably expensive and will yield results that are absolutely pathetic (to the tune of trillions of dollars being spent to potentially reduce the earth’s temperature by an almost imperceptible .08 degrees over fifty years). The message of this book is simply that there is more to this issue that simply protecting the environment,

I love this world God has given to us and entrusted to us. I know that we have not always been faithful stewards of it and have done a great deal of damage to it. And yet I also know that there is a whole lot at stake in the discussion about human-caused global warming. This discussion goes far deeper than its proponents would have us believe. Books like this one, while far from perfect, can at least begin to equip us to see that there is another side to the argument and to provide some balance to the hysteria we hear all around us. I am grateful that this book is available and am grateful also to see others like it slowly beginning to hit store shelves. I hope they can stem the tide.

I believe that human-caused global warming is largely nonsense and is largely driven by unbiblical, anti-God ideology. With this book review I am going on record with that belief. If I am proved wrong, feel free to laugh at me in ten or twenty years when the earth’s water levels have risen, when the air is unbreathable, when energy costs have increased exponentially and when the earth is reduced to utter ruin. Just laugh at me. I can take it. But I’ve got a feeling that twenty years from now we will have moved on to the next big problem and will have forgotten all about global warming, just like we’ve forgotten all about global cooling. And we will just keep repeating history.