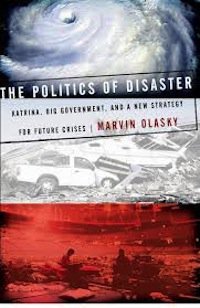 Buy from Amazon
Hurricane Katrina was a national disaster that was played out on an international stage. In this age of instant and graphic communication where there is an increasingly thin line between news and entertainment, the whole world watched while the hurricane bore down on New Orleans and the Gulf Coast. The world watched with sick fascination as pictures of death and devastation flashed across their television screens. Untold millions watched as the New Orleans levies let go, inundating the city with water. And the world saw the response which was both impressive in its speed and frustrating in its disorganization. In The Politics of Disaster, Marvin Olasky, professor of journalism at the University of Texas and editor-in-chief of World magazine, takes a look back at this disaster and looks forward to the inevitable “Katrinas” of the future. “This book examines incidents, some partially preventable, that have a major negative impact on the ability of an entire community to live peaceably.”

Olasky dissects the disaster and gazes into the future. He begins by asking what went wrong in New Orleans. He traces the bulk of the problems to two sources. The first is what he calls “Katrina’s paperocracy.” This sarcastic sentence tacitly describes the paperocracy: “Perhaps New Orleans could have used even more planning and more meetings to unify the FEMA, OEP, LOEP, NHC, MCI, and ESF plans and experience.” New Orleans was prepared, on paper at least, to deal with a Hurricane. Various agencies had plans in place. But these plans were contradictory and allowed little flexibility. Fear of overstepping boundaries, fear of litigation, kept the plans from being effective. “The brutal fact is that big government tends toward big bureaucracy, which means elaborate paper flow but the tendency of one misplaced card to bring down the house.”

The second source of problems was the media. “National media had become a megaphone for hysteria and blame. Among the casualties were truth, speed in offering help, and progress in both international affairs and domestic relations.” Reporters focused undue attention on the traumatic, dramatic events at the Superdome and the Convention Center. Olasky looks at the reality of the crime and violence in the days after the storm and shows how the media stirred hysteria, constantly reporting rumor as fact and fiction as rumor. This hysteria did great damage to the city. For example, reports of armed gangs and snipers were largely false, but relief efforts were put on hold while soldiers and police were dispatched to hunt down these non-existent criminals. As Olasky says, “crying and yelling made for much better ratings than calm assessment of the damages.” News became entertainment. A real-life tragedy became little more than an action movie, and millions sat transfixed by it.

The second section of the book discusses what went right. Olasky looks at rescue, relief and recovery and shows how faith-based organizations, primarily the Salvation Army, the Southern Baptist Convention and local churches, by far outperformed any government agency. The absence of a paperocracy allowed these organizations to move quickly and decisively. He looks also at corporations such as Home Depot, Wal-Mart and Fed-Ex which played an integral role in relief efforts and which put the government to shame with their speed, preparedness and organization.

In the third section the author suggests ways of reforming national disaster policy and then, in the fourth, proposes how faith-based organizations can take the lead in post-disaster relief efforts. The book wraps up with a chapter on international disasters and another that looks at how America is equipped to deal with one of three disasters likely to strike her in the future: earthquake, terrorism and pandemic.

The final chapter, “Beyond Worry,” provides a biblical basis for not becoming overwhelmed with fear of the future. We must avoid both fatalism and undue worry, and place our confidence in God’s providence. “Maybe we need to reawaken that understanding if we are to deal with disasters in ways neither foolhardy nor fearful.” We can have full assurance that God is in control, that nothing happens apart from His knowledge, even events that are difficult to understand. “What’s hard to accept is that the road to contentment runs through misery.” As has been so clearly shown in the death of Jesus Christ, pain and suffering can be terrible means to a wonderful end.

The Politics of Disaster shines some much needed light on the events of Katrina, proving that so much of what we witnessed on television was pure fiction. While the disaster was an act of God, it was made far worse by politics, pride and falsehood. We can only hope and pray that the next time a major disaster strikes America, she will be better prepared and that she will have learned from the mistakes of Katrina, for future disaster is inevitable. Clearly the fruit of much research and much consideration, this is an excellent book and one I enjoyed thoroughly.