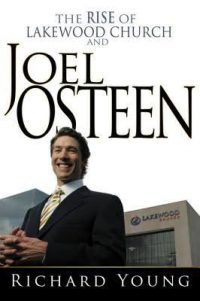 Biography: An account of a person’s life written, composed, or produced by another. Hagiography: A worshipful or idealizing biography. I suppose it is not always easy to determine where biography ends and hagiography begins. But in the case of The Rise of Lakewood Church and Joel Osteen, I am quite certain Richard Young has crossed the line.

Lakewood Church was founded by John and Dodie Osteen on Mother’s Day 1959. A former Southern Baptist pastor, Osteen left the Convention after adopting charismatic beliefs. A leader in the charismatic movement and author of many books, he continued to pastor this church until his death in 1999. Without a successor in place, John’s son Joel decided to try his hand at preaching. And the rest, as they say, is history. Lakewood has risen to become the largest church in America with tens of thousands of people attending services every weekend. The services are broadcast around the world on television and through the Internet to millions more. Osteen’s first book, Your Best Life Now became a New York Times bestseller selling millions of copies. Joel Osteen, the smiling pastor, has become one of the most recognized and recognizable faces of Christianity.

The Rise of Lakewood Church and Joel Osteen, as we can deduce from the title, traces both the rise of the church and the subsequent rise of Joel Osteen. Each of these emphases receives roughly half of the book’s 240 pages. And where Young seems to be enthusiastic about John Osteen, he is enraptured with Joel. The author’s bias is never in doubt. He is captivated with Osteen and seems to feel no need to display any objectivity. The book is filled with hyperbole (though, sadly, this may well be unintentional hyperbolism). “Joel Osteen is one of the great marketing geniuses in the history of the Christian world;” Lakewood Church’s opening weekend in the Compaq Center was “one of the greatest weekends in American church history;” “Together, the team at Lakewood is probably the greatest ministerial team in America.” These superlatives grow tiresome and are especially ridiculous when understood in the context of Joel’s ministry. He succeeded his father in 1999, meaning that his ministry has not yet even spanned a decade. His ministry has seemingly only just begun.

Young dedicates a small portion of the book to discussing Osteen’s critics, but he does so in a condescending way and never once interacts with the most important criticisms–those drawn from the Bible. In the introduction to this book he describes a typical Sunday at Lakewood and, when writing about the worship service, says “I couldn’t help but notice a well-dressed, gray-haired gentleman. His arms were folded, his mouth tightly closed, and he seemed to be looking around, passing judgment on all around him.” Later he summarizes Osteen’s critics like this: “Those who criticize Joel are just people who take a different approach to this teaching [that Christianity has a temporal benefit, not merely an eternal one] and don’t approve of those not like them.” Never once does he interact with serious theological concerns except to affirm that Joel believes in a set of basic Christian doctrine but that he chooses to dwell on what is positive rather than what is negative. Much like in Osteen’s ministry, the word “sin” is only mentioned in this book in a negative sense when describing cliched caricatures of evangelicals. Even in discussing Victoria Osteen’s well-publicized tantrum on an airplane he will admit no wrong-doing, only misunderstandings and media that is set against Osteen. In discussing Osteen’s infamous “media miscue” on the Larry King Show, he admits “Joel made a major mistake” but assures us this was not a mistake based on conviction, but on a desire to ensure that neither unbelievers nor critical Christians would be offended.

Also strangely absent from this book is any real assessment of what Osteen offers the wider church, unless it is merely a message that is positive. But many other pastors have shared a sin-free, positive message before Joel. The word “gospel” appears a handful of times but is never explained, never declared. Young does not discuss how Osteen has impacted the church at large and how other pastors and leaders are emulating him. And yet Young considers him the next great Christian leader. He writes “the Lord has raised a man up in each generation to be a leader and impact that generation. There is a straight line from Charles Finney to D.L. Moody to Billy Sunday to Billy Graham. Who will be that man for this generation?” According to Young it will be Osteen.

Young aptly summarizes Osteen in quoting a woman who watches his program on television. “Most preachers you hear make you feel bad about yourself and they talk about the worst part of yourself. Joel Osteen talks about the best part of yourself.” Young writes, “Statements like this show that Joel is becoming a huge force in Christianity who is reaching out to people far beyond the standard Christian market.” He is, indeed, reaching beyond the typical Christian audience, but this book makes it clear that he is reaching with a message that shares only part of the gospel. Osteen shares a message of God’s love, but, because he will not speak of sin, does not share our desperate need for God’s love and forgiveness. His message, like this book, is incomplete, sharing only half of the story.

With Osteen’s meteoric rise to prominence we can be sure that he will be the subject of many biographies. This is the first, but will certainly not be the last. Surely it will not and cannot be the best. While it provides a good deal of interesting information and succeeds in providing an outline of the rise of Lakewood Church and the subsequent rise of Joel Osteen, it does so in a way that is so clearly biased, so one-sided, that it is difficult to take it seriously. It is not a book that is without value, but it is one that should be read with discernment and with a clear understanding that this is as much hagiography as it is biography.