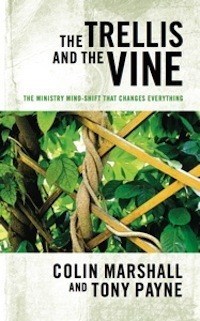 Buy from Amazon Buy from WTS Bookstore
I kind of wish I had read The Trellis and the Vine in 2009 instead of reading it on January 1, 2010. That way I could have put it in its rightful place on my list of the best books published that year. As it stands, though, the most I can say now is that it’s the best book I’ve read so far in 2010. But that is little praise, I suppose, considering I am now only three days (and three books) into the new year. We may have to suffice it to say that this is an exceptional book, one that ought to be read by any pastor or church leader (and any interested layperson, at that). It is one that would definitely have made it onto my list had I read it immediately after its release instead of a couple of months later.

The Trellis and the Vine is a metaphor Colin Marshall and Tony Payne use to introduce a mind-shift in ministry that they insist will change everything. That is no small claim. A trellis, of course, is a structure that is used to support, to hold up, a vine. In this metaphor the trellis refers to the administrative work within a church, those tasks that, though important, are not actually directly related to discipling people. Vine work, on the other hand, is those tasks of working with the vine, drawing people into the kingdom through evangelism and then training them to grow in their knowledge of God and their obedience to him. As the authors say, “The basic work of any Christian ministry is to preach the gospel of Jesus Christ in the power of God’s Spirit, and to see people converted, changed and grow to maturity in that gospel.” The problem, though, is that trellis work tends to take over from vine work. Perhaps it’s because trellis work is easier and less threatening; perhaps the trellis work looks more impressive. But for one reason or another, many Christians, and pastors in particular, soon find themselves consumed with trellis work, leaving them little time and attention for the vine. “Whatever the reason, there is no doubt that in many churches, maintaining and improving the trellis constantly takes over from tending the vine.”

What Marshall and Payne suggest in this book is that most Christian churches need to undergo a radical re-evaluation of what Christian ministry really is. They need to go back to the very basics to understand the aims and goals of ministry, to learn how it proceeds and to see afresh the part we play in it. The authors argue that “structures don’t grow ministry any more than trellises grow vines, and that most churches need to make a conscious shift–away from erecting and maintaining structures, and towards growing people who are disciple-making disciples of Christ.” They offer a list of eleven changes of mindset that may be necessary for churches: from running programs to building people; from running events to training people; from using people to growing people; from filling gaps to training new workers; from solving problems to helping people make progress; from clinging to ordained ministry to developing team leadership; from focusing on church polity to forging ministry partnerships; from relying on training institutions to establishing local training; from focusing on immediate pressures to aiming for long-term expansion; from engaging in management to engaging in ministry; from seeking church growth to desiring gospel growth.

Having done this, they show that every Christian is called to be a vine worker. This is not the exclusive domain of pastors or elders, but is the call of God upon all believers. “At the most basic level,” they say, “the Bible says that Jesus doesn’t have two classes of disciple: those who abandon their lives to his service and those who don’t. The call to discipleship is the same for all.” The basic agenda for all disciples is to be a disciple-maker. This does not point us simply to evangelism, but also to assisting other Christians grow in holiness. Whether evangelizing or discipling (or “training” as they prefer), the basic call of the Christian is to speak God’s Word to others. Therefore every Christian is an evangelist and every Christian is a minister. Marshall and Payne point to the concept of “gospel partnership” which they say “is the normal Christian life. It means standing together united in the gospel, determined to live as citizens of heaven in the midst of our corrupt generation, longing and striving to see the gospel be defended and proclaimed, and bravely copping the conflict, struggle and persecution that inevitably follow.” Meanwhile, the heart of training “is not to impart a skill, but to impart sound doctrine.” We are to train one another to reject false doctrine, and to conform hearts and lives to sound doctrine. “Good biblical training results in a godly life based on sound, health-giving teaching.”

Such shifts in mindset will necessary impact just about every other aspect of church life, extending even to the preaching of the Word and the call of some Christians into full-time service for the gospel. The authors cover such topics within the book, even going so far as to (dangerously and maybe a little mischievously) title a chapter “Why Sunday sermons are necessary but not sufficient.”

The Trellis and the Vine, a book I am sure I will read again very soon, helped me to see, more clearly than ever I think, how much of what passes for ministry within a church is really “mere” trellis work. Of course such work is important but it can so easily taken on undue prominence and become the heart of the church’s work. Meanwhile, the vine, the people, suffer neglect. In the past I have been involved in “trellis” churches and can attest to the grave danger they pose. This book has given me so much to think about, so much to reflect upon.

Mark Dever declared The Trellis and the Vine “the best book I’ve read on the nature of church ministry.” That is no small praise from a man who has dedicated much of his life’s work to that very subject. I am inclined to agree with Dever (who is infinitely more qualified than I am to make such an assessment). This is a very good book and one that offers vast amounts of godly, biblical wisdom. I give it my highest recommendation and would be thrilled to see it in the hands of every pastor and church leader.

Here is a short video in which Dever introduces the book: