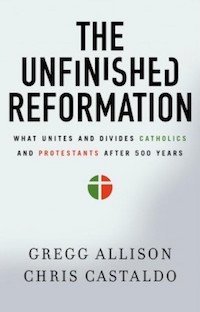 Is the Reformation over? This question is going to be asked over and over again as we approach 2017 and, with it, the 500th anniversary of the Protestant Reformation. It is the question Gregg Allison and Chris Castaldo face in the title of their new book, The Unfinished Reformation: What Unites and Divides Catholics and Protestants After 500 Years.

The book began as a search for clarity. A friend had asked Castaldo for a book that surveys the commonalities and differences between Roman Catholic and Protestant theology with special reference to the Reformation. Castaldo was not aware of one so inquired with friends and eventually Gregg Allison suggested they fill the gap by coauthoring one. The Unfinished Reformation is the happy result.

Allison and Castaldo begin their work with a brief survey of the Reformation, telling how it came to be, how it transformed Europe, and how it changed the course of history. They helpfully define the Reformation (since it was, in some ways, one of many reform movements) and then tell why it is so important that we come to a consensus on whether or not the Reformation is finished. They offer these five reasons “why the question of the Reformation’s enduring significance is now more relevant than ever:” 1) Conflict in churches and families, 2) the attraction of Pope Francis, 3) the problem of Nicodemism (i.e. whether people can remain in the Roman Catholic Church even if their beliefs align more closely with Protestantism), 4) conversion among Catholicism and Protestantism, and 5) co-belligerence in American society.

The book’s main emphasis is a detailed examination of the key similarities and differences between Roman Catholicism and Protestantism. In the broadest terms, these differences relate to matters of authority and salvation—who or what is the ultimate source of authority for Christians, and how can people be saved. Authority and salvation were the key issues of the Protestant Reformers, and they remain the key issues today.

Where do Protestants and Catholics stand together? The authors find ten important commonalities: The triunity of God, the nature of God, the revelation of God, the person of Jesus Christ, the saving work of Christ, the Holy Spirit, the glory and travesty of human beings, the belief that God initiates salvation, the conviction that God makes us his people, and the certainty that we have legitimate future hope. Though there is no exhaustive agreement in each of these areas, there is an important measure of it.

Then where do Protestants and Catholics disagree? Where tracing the commonalities requires just a single chapter, examining the differences takes several. Allison and Castaldo focus first on scripture, tradition, and interpretation, showing there are significant differences in how Catholics and Protestants answer key questions: How does God speak to the world? To what extent is God’s Word without error? Of what does the Bible consist? How are we to understand the Word of God? Then they advance to the image of God, sin, and Mary with these questions: What does it mean to be made in the image of God? What is sin and its consequences? What is the role of Mary? Then they need to look at the church and its sacraments. What is the church? What are the sacraments? How do the sacraments work? What is baptism? What is the Lord’s Supper? Then, finally, the matter of salvation: Why are people accepted by God? What role do good works play in salvation? Is one’s salvation secure? Why do Catholics and Protestants differ on purgatory?

Simply surveying the volume and nature of these questions shows the extent of the ongoing divide between Protestantism and Catholicism. While there are areas of real commonality between the two, there are also deep and enduring differences. This long examination leads to the question at the heart of the book: Is the Reformation over? They say there are three possible answers: “Yes,” “no,” or “no, but…” While each has some truth to it, they opt for the final option, “no, but…”

The strengths of this book are its winsome tone and its deep desire to be truthful, to represent Roman Catholic theology at its strongest and most accurate. There are no cheap shots here and no caricatures. In almost every case, the authors describe Catholic doctrine by quoting its own official documents. They also grasp the difficulty of uniting Protestants and Catholics, in large part because of Catholicism’s exclusive claims: “From our Protestant perspective, unless the Catholic Church undergoes radical reform according to Scripture, the Reformation will necessarily continue.” At the same time, the Catholic Church must demand that Protestants return to “Mother Church” and cede to papal authority. These are deep, deep divides. As long as these divides endure, so, too, must the Reformation.

Does the book have weaknesses? I wish the authors had spoken more of church history and Rome’s long history of persecution against Protestants. For that, too, is an important part of the story. I wish they had given more detail on why generations of Christians were so concerned with Catholicism that they considered the pope the antichrist. I was also unconvinced that we are duty-bound to have “respect for the Catholic Church as an essential part of the broader, historic Christian tradition” since in this way, for example, “Catholics differ from the Jehovah’s Witnesses and the Church of Latter-Day Saints.” While this is true to some degree, there is also the reality that Catholicism tried again and again to utterly destroy Protestantism, something that has not been attempted by those other faiths. Again, I wish they had spent more time in history.

I find The Unfinished Reformation at its strongest when performing that detailed examination of the similarities and differences between Roman Catholicism and Protestantism. It is a great angle for a unique book and the authors perform their task well. They are careful, nuanced, and ever so winsome. In this way especially the book is a useful contribution to a difficult subject.