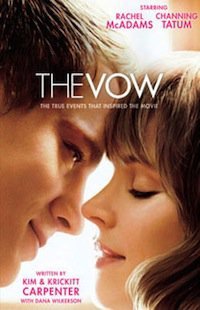 Buy from Amazon
Right there are the top of the New York Times list of nonfiction bestsellers is The Vow by Kim and Krickitt Carpenter. This book was published by B&H Books (a Christian publisher) twelve years ago, so what is it doing at the top of this week’s list? Well, 4 years before that the authors signed a deal for the movie rights to this story and after all these years that movie has finally hit the big screen. A new edition of the book has been published to coincide with the film and it has raced right to the top of the list.

I have not seen the movie and neither do I intend to, so this is a review of only the book. From what I hear, the film is only very loosely based on the broad outline of the story; not only is it a poor movie according to the reviews, but it also ignores the Christian moorings that are so important to the real-life characters.

So what is The Vow all about? Kim and Krickitt Carpenter had been married for just 10 weeks when they were in a serious accident in which Krickitt suffered traumatic head injuries. When she woke from her coma she had no recollection of her husband and no recollection of ever having been married to him. Not only that, but her personality was very different; once a sweet and kind person, she was now often angry and frustrated and cruel. But in his marriage vows Kim had promised to remain with her, and that is exactly what he did, suffering deeply as he cared for the wife who no longer knew him and who no longer wanted him. The Vow tells their tale, from dating to marriage to the accident and back to dating as they try to fall in love a second time. It is a stirring story in many ways–an inspirational one that deserves to be told.

Central to The Vow is the Carpenter’s Christian faith. There is never any doubt that this is a distinctly Christian book, meant to make the reader understand that the vows that held this couple together were made before God and that even in the darkest days these two remained accountable to God. They give all credit and glory to God as the one who held them together despite their unique and trying circumstances.

Yet despite all of that, I found myself wishing that this book was just a little bit more. I wanted it to dive deeper into the realities of marriage, to do more to anchor the story in gospel truths–not just “Jesus” but “Jesus Christ crucified and risen from the dead,” not just marriage as an institution, but marriage as a display of the gospel. The broad outline of the story is so good, but the execution feels dry and inadequate. Marriage is certainly not less than “the vow,” but it is so much more!

The filmmakers changed the story to remove the Christian elements, to add more sex and passion. I found myself wanting to rewrite or at least embellish the story, to have the characters make deeper proclamations of faith, to have them talk about the unique way in which their marriage has been able to model the real marriage of Jesus Christ and his church. It could have been more, it could have taught more truth, it could have been so much deeper and so much more inspiring with even just one or two references to the powerful words of Ephesians 5. Instead of “We love God so we have to love one another” it could have been “Jesus Christ died for my sins, rose from the dead, and now reigns supreme in this world. He gave me a unique opportunity to model his relationship with his church in my marriage, and here, by his grace, is how I did that.” It’s not that I in any way doubt the faith of the characters; I just wish it had been more explicit and that the implications of this faith had been displayed more clearly.

I suppose this is one of those books that I enjoyed but only with some measure of lament. It could have been so much more. The Vow is worth the time and the cost, but its power and value could easily have been so much greater.