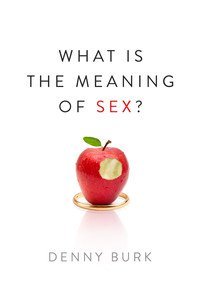 Sex. It’s a constant topic today, isn’t it? Whether you read entirely within Christian media, entirely outside of it, or a bit of both, you can hardly avoid the topic. And if it’s not sex itself, it’s one of the related topics—homosexuality or abortion or marriage. There are few areas where we find such debate and few areas that have greater impact on life, family and church.

Denny Burk has just stepped into the fray with What Is The Meaning of Sex?, a wide-ranging treatment of what the Bible says about sex and sexuality. This is not a guide to a better marriage and certainly not a bedroom how-to. Instead, it is a book that addresses sex in the big picture—the biggest possible picture—by discovering the ultimate purpose for sex and, from there, its many implications.

With that foundation firmly in place, Burk spends a chapter rebutting those contemporary theologians who like to pit Jesus against Paul as if Jesus the loving allowed all manner of sexual practices that Paul the prude later banned. Still sticking very close to the text of the Bible, Burk shows that we understand the Bible best when we see Paul’s words and Jesus’ words as friends rather than enemies. The rest of the book then builds upon this ultimate purpose and this careful hermeneutic by looking at some areas related to sexuality that are the subject of debate today.

Chapter 3, “Glorify God with Your Marriage,” carefully traces what the Bible says about the definition of marriage: that it is covenantal, sexual, procreative, heterosexual, monogamous and nonincestuous. Burk proves its purposes from its definition, saying “Marriage is a sexual union for the purposes of consummation, procreation, the expression of love, and pleasure.” This “covenant sexual union of one man and one woman tends toward the glory of God as it symbolizes God’s redemptive love for his people through Christ. In this way sexual union within marriage tends toward the glory of God.”

Chapter 4 is titled “Glorify God with Your Conjugal Union” and here Burk turns to 1 Corinthians 7 to show that sexual intimacy is both a privilege and a duty within marriage. He interacts with recent trends within evangelicalism that allow and even endorse certain sexual acts and aids (focusing critical attention on Mark and Grace Driscoll and their book Real Marriage). He suggests and, I think, proves, that such people have succumbed to a serious misunderstanding of Christian freedom. He also provides a careful, excellent overview of what the Bible teaches about divorce and remarriage.

In the conclusion Burk explains three ways people expression confusion about sexuality today, answering each from Scripture and within the lens of God’s ultimate purpose in human sexuality.

While there is a great deal to commend in What Is The Meaning of Sex?, let me point to just three of its most notable strengths: This book is biblical. No matter his topic, Burk never strays from a biblical text and as he looks at those texts he consistently applies careful, nuanced exegesis. This book is timely. While the principles are timeless, the issues he interacts with are most relevant and extremely helpful in our time and our context. This book is pastoral. While Burk is a scholar, he is also a pastor, and he brings together the best of both worlds by proceeding carefully and logically, but always with a view to real people in real situations.

What Is the Meaning of Sex? is a good book—a very good book—and one I heartily recommend. There are hundreds of books out there on sex and marriage, but none quite like this and I believe it will prove especially helpful to pastors and to ministry leaders who find themselves navigating increasingly tricky waters. Burk’s careful work in the text of Scripture lays a foundation that will provide guidance for even the most perplexing question.