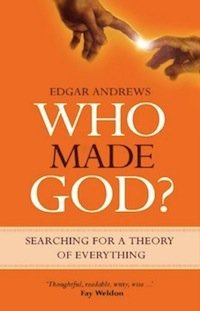 Buy from Amazon
Why should the Devil get all the good scientists? It sometimes seems that way, doesn’t it? We hear of scientists like Stephen Hawking and Richard Dawkins and others who are acclaimed as being at the top of their field and almost inevitably it seems that they are atheists or otherwise committed to explaining the world in terms of Darwinian evolution. Occasionally we find a great dissenting mind, but then we discover that that person is committed to beliefs that seem opposed to the plain account of Scripture. So we have Francis Collins who writes The Language of God but who in the book says that, though God exists, life and creation can be explained in terms of natural laws and processes that do not depend on the Divine hand of God. It is both tiresome and frustrating.

But here at last comes Edgar Andrews whose list of academic credentials include more letters than all the names in my family: BSc, PhD, DSc, FInstP, FIMMM, CEng, CPhys (which, according to a site I consulted, is together an anagram for disbenching tscpf fpsps chym- cmd ‘m). No, I don’t know what any of those degrees mean, but they sure sound impressive. He is Emeritus Professor of Materials at the University of London and an international expert on the science of large molecules (not small ones, mind you, only the large ones). His credentials include things that sound like they must set him apart; things such as this: In September 1972 he was one of four specially invited speakers at the dedication symposium of the Michigan Molecular Institute, two of the others being Nobel Laureates Paul Flory and Melvin Calvin.

Put it all together and you find that Andrews is one smart dude. He’s smarter than you and me and the rest of us put together. And in his new book Who Made God? he launches a full front assault on the new atheists. He does this not through a point-by-point refutation of their books, but by an insightful look at science and the existence of God. An excellent writer who mixes a subtle British sense of humor with a powerful intellect and a deep understanding of science, he very quickly picks apart the arguments we have for so long been hearing from the likes of Richard Dawkins and Stephen Hawking and even Francis Collins. Yet he still crafts a book that is readable and, best of all, understandable. Even the chapter dealing with string theory is comprehensible–no small feat for a smart guy writing about what lies at the very frontier of science.

The topics Andrews covers range from the existence of God to the nature of hypotheses to the abilities of mutations to create. Through it all, he shows how the claims of atheism and naturalism fall short–how they rely on bad science, how they require bad logic or unfair hypotheses and how they are beneath the very minds that create them. He draws the reader to inevitable conclusion that there is a Creator who is pre-existent and who is living and active in the world today. By the end he draws the gaze of the created to the majesty of the Creator and calls the reader to see God for who he is.

A powerful book and one that is exceptionally well-written, Who Made God? is just the book I’ve been waiting for. It aptly refutes the claims of the new atheists but does so without giving away the farm in the meantime. And I couldn’t ask for much more than that.