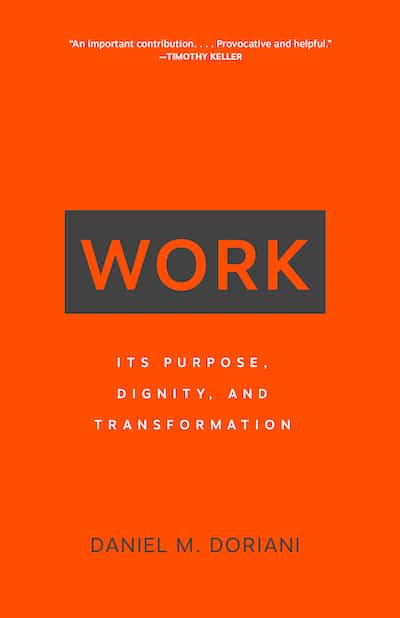 It’s not like we’re hurting for books about a Christian understanding of work. In fact, the past few years have seen nothing short of an explosion of interest in the subject. So when yet another showed up in my mailbox, I was tempted to set it aside. I was tempted, that is, until I saw D.A. Carson’s commendation: “The last few years have witnessed a flurry of books that treat a Christian view of work. This is the best of them. Well written, historically comprehensive, theologically informed, exegetically sensitive, this is now the ‘must read’ volume on the subject.” That’s no small praise from a distinguished theologian and voracious reader who once told me he reads several hundred books each year and has maintained that pace for decades. I decided that instead of setting aside Daniel Doriani’s Work, I’d prioritize it. I’m so glad I did.

Daniel Doriani is known as a preacher, a seminary professor, and an author of several excellent commentaries. This book may be best understood as a passion project, an area of particular interest for which he has been formulating his thoughts over a long period of time. “In this book,” he says, “I hope to engage all who want to practice love and justice in their work, whether they be professionals or laborers, business leaders or artisans, students, retirees, or stay-at-home parents.” That being the case, he writes especially for two kinds of people.

The first kind doubts the value of their labor. When asked about their work, they often begin with two words: “I just.” They say, “I just watch children,” “I just stock shelves,” “I just market clothing,” “I just transport vegetables.” Yes, but anyone who ships vegetables efficiently makes life better for numerous people, many of them poor. That said, I’m no “Your work matters” cheerleader. Indeed, some work is so shoddy and trivial that it barely seems to matter.

I like that, because while he celebrates the value of all legitimate forms of work, he also doesn’t act as if all work is exactly equal—a position we sometimes try to maintain. And then there is the second kind of person.

I also write for a second kind of person, the woman who ardently yearns to do significant work, the man who dares to think his work can change his corner of the world. In this, I join John Calvin, Abraham Kuyper, and their followers as they affirm that Jesus is Lord of every domain, not merely the church. Jesus declares that he rules everything when he says that the kingdom of God has arrived (Matt. 12:28; Luke 11:20). When the Gospels show Jesus working, whether teaching crowds or healing the sick, the physicality of his activity demonstrates that redemption shapes all of life—the body, not just the spirit.

So he doesn’t write only about the jobs we do, but the deeper yearnings we have to bring about reform in areas of passion or vocation.

He begins by laying out twelve principles that form a foundation of a Christian understanding of work—a kind of biblical theology that looks at work from Genesis 1 to Revelation 22 to see what all of scripture has to say about what we do. The opening chapters strengthen this foundation by looking deeper at several of the issues such as the glory and misery of work in a God-created but fallen world, and the restoration of our work through the gospel of Jesus Christ. He also looks at how views of work have changed through time, both within the church and outside of it.

The second part of the book, chapters 5-8, looks to the essential topics of calling, faithfulness, work in difficult places or amid difficult circumstances, and the God-ordained rhythm of work and rest. Two final chapters make up the third part of the book and explore how Christians can (and often should) make efforts to reform the workplace and wider society. Those two chapters “offer a theology or apologetic for the project of attempting to bring reformation through work.” A useful appendix shows how Christians might apply biblical principles to ten common but very different fields of labor, from teachers, to soldiers, to entertainers.

I found the book extremely helpful. Doriani covers some common territory such as that biblical theology of work and that false dichotomy between vocations that are sacred and secular. But he also adds some thought-provoking material about the things we may take for granted in a society dominated by a very utilitarian view of work and workers. He aptly shows how the sometimes cutthroat practices of business in a capitalist context may not be fully compatible with a biblical view of love and justice. He calls for hard work, but also deliberate rest from that work. He calls for us to be generally satisfied in the stations to which God has called us, but also to be willing and perhaps even eager to take opportunities to bring reform. He shows how there is dignity in all legitimate work, but also shows how some forms of work genuinely matter more than others.

Having read this book and benefited from Work, I’m inclined to agree with Carson and to consider it the leading work on the subject. I gladly commend to every Christian.