Toronto is home to a significant Jewish population—over 160,000 according to the census of 2001. A significant part of the population is Orthodox Jews who attempt to live in close conformity to the laws and precepts of the Torah as it is explained in the Talmud. Since the beginning of the twentieth century, the heart of the community has been along Bathurst street and if you were to drive through that area today you would see Jewish schools and synagogues, kosher supermarkets and many distinctly Jewish businesses. The yarmulke is as common there as the baseball cap is in the suburbs and as you visit offices in the area you will frequently spot a mezuzah affixed to the door frame. I enjoy the area, especially its bakeries, and find myself there often.

Murray is a friend and a fellow elder at Grace Fellowship Church. For the past twenty-nine years, he has been a paramedic and over the course of his career has often found himself working right in the center of Toronto’s Jewish community. His job has taken him into many homes, businesses and synagogues and along the way he has developed relationships and friendships. Over the years he has shared with me several interesting little glimpses of his work in that community—a community that attempts to adhere to every part of the Old Testament law. It is fascinating to hear how these attempts manifest themselves in the twenty-first century. 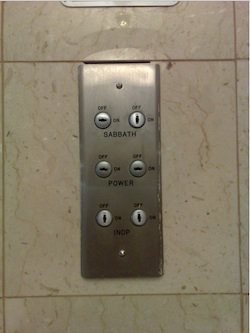 Jewish law forbids work on the Sabbath, but the question that has always plagued law-keepers is this: what actually constitutes work? Many modern interpretations of the law state that using an electrical button on the Sabbath constitutes work. Pressing a button closes an electrical switch and the closing of the switch is interpreted as “building” a circuit. Any kind of building on the Sabbath is strictly forbidden by the law. For that reason, many of the apartment buildings in this area use a feature in their elevators known as “Shabbat [Sabbath] service.” Sabbath service removes the need to press buttons. When the service is engaged, the elevator will either stop at every floor on both the way up and the way down, or it will rise to the top and then stop at every floor on the way down. In either case, the sanctity of the Sabbath is maintained. (Wikipedia’s article on Shabbat service is fascinating in its explanation of the variations of interpretation).

As is the case in many large cities, Toronto’s Jews have access to Hatzoloh, a non-profit organization whose purpose is to respond rapidly to emergency medical situations in Toronto’s Jewish community. Though they cannot transport patients to hospital, they are able to respond to calls and to assist paramedics in providing emergency services and language translation. Though they are on-call and available 24 hours a day, there is one small change in their operations on the Sabbath when driving a vehicle is forbidden. Their job is to extend mercy and prolong life and, according to Talmudic interpretation, responding to calls does not violate the Sabbath. However, once a call is complete, they are no longer on a mission of mercy and would be in violation of the Sabbath if they were to drive. What they do instead is employ a service run by non-Jews who will drive both their vehicles and the emergency personnel back to their homes.

The glimpse of the community that fascinates me most is the one which begins with Murray responding to a call on a hot, summer Saturday afternoon. After he completed the call and was walking back to his ambulance, he saw a man outside a neighboring home waving him over. This man led Murray into a very hot home and explained that his mentally disabled son had inadvertently turned off the air conditioning and they could not turn it back on without violating the Sabbath laws. He pointed to the thermostat and asked Murray, “Could you please turn it back on?” Murray flipped the little plastic switch and the air conditioner immediately came back to life. The man and his family were exuberant in their gratitude.

As Murray spoke to this man, and as he speaks to other members of the community, he sometimes asks whether he should become Jewish. Wouldn’t this be the path for him to live in obedience to God and to experience divine blessing? The answer is, “No! Don’t become Jewish! If you become Jewish you will have to obey the law—the whole law.” And the law is a heavy burden.

It is simple enough to look at other people’s religious observances and stand in judgment. It is easy to scoff at a prohibition on pressing buttons, at allowing a parademic to drive to a call but not back, of asking non-Jews to do the things the law forbids of the law-keeper. But we would be remiss if we did not look for ourselves here, if we did not acknowledge that at heart we are all law-oriented. Even Christians, we who declare that the law has been fulfilled in the death and resurrection of Jesus Christ, are prone to hedge ourselves around with rules, to believe that rules can give us safety that the freedom of grace may deny. It’s as if grace is so foreign a concept to us that we simply cannot or will not believe it, and instead flee back to the law.

But the great trick of the law is that it does not and cannot deliver what it promises. It brings no joy, no fulfillment, no assurance. When we trust in the law for our salvation, we begin to hate and resent the very thing in which we have invested our hope. The more we trust it, the more it binds us. Tim Keller says it well in his explanation of Galatians 3:7-9 (from Galatians for You):

Theologically, anyone who says: I can be saved by obeying the law must then be prepared to really look at what the law commands. To love God wholly, we would have to obey the law wholly. To be blessed by God instead of cursed by Him, we would have to look at the law and satisfy its every demand. And that cannot be done. Objectively, attempting salvation-by-law-observance means we are cursed.

This means that, psychologically, everyone who is seeking to save themselves by their own performance will experience a curse subjectively. At the very least, attemping to be saved by works will lead to profound anxiety and insecurity, because you can never be sure that you are living up to your standards sufficently.

These lines from John Bunyan speak to this very thing:

Run, John, run, the law commands
But gives us neither feet nor hands,

Far better news the gospel brings:
It bids us fly and gives us wings

When we are captive to the law we try to find workarounds, to find ways of getting by the oppressive rules, to retain the favor of God. We drive to a call but not back; we ask others to do the things we will not do ourselves; we construct elaborate means of bypassing what is forbidden. But when we are drawn to Christ we find joy in obedience and we delight in finding ways of deepening our commitment and our obedience.