Today you’ve got a rare opportunity to own (win) a little piece of history and what must be the most unique thing I’ve given away through this site. Rare Document Traders has offered me a sermon manuscript page from a Charles Spurgeon sermon preached at the Metropolitan Tabernacle on Sunday, September 22, 1889. This is an exclusive offer to the readers of Challies.com and it won’t last long. The page is heavily amended by the Prince of preachers himself before the sermon went to the printers.

It comes with the sermon manuscript page, as well as a printed page giving the sermon text itself and title, a picture suitable for framing and a certificate of validation and authenticity from Spurgeon’s College in London (see an example). I recently purchased one of these myself as a gift, so can attest that it’s genuine.

Let me explain just a little bit. When Spurgeon preached, someone would immediately transcribe the sermon. That transcription was passed to Spurgeon who would often make a few changes to it before sending it off to be printed and distributed. Here is how it happened:

The sermon, written out in longhand by the reporter, was taken to C. H. Spurgeon’s house, and early on Monday morning he commenced to revise it, first of all glancing at the number of folios to see whether the discourse were longer or shorter than usual, whether he would have to cut it down or write some additional matter to bring it to the required length. On one occasion, at least, the preacher was found by the servants at work upon the manuscript as early as four o’clock in the morning, and sometimes, when he had preaching engagements in the country on Monday (necessitating an early departure), he has been compelled, on Sunday night, after returning weary from the day’s labors at the Tabernacle, to begin revising the shorthand writer’s manuscript then. The work could not be left till Tuesday, and C. H. Spurgeon used playfully to remark that the earth itself would cease to revolve if the sermon did not come out every Thursday morning.

After the preacher had made the alterations and corrections which he considered necessary upon the manuscript, he used to hand it over to his private secretary for the verification of quotations, the proper punctuation of the matter, etc., and when about a third was ready, a messenger would take that installment post-haste to the printers, returning later for the remainder. By this time it was usually late in the afternoon, for the work was done thoroughly, and after tea the preacher had to hurry off to the Tabernacle for the weekly prayer meeting, which was sometimes followed by another engagement.

What you can win today is one of those pages–a page written out by the shorthand writer and then amended by Spurgeon. It looks a little something like this: 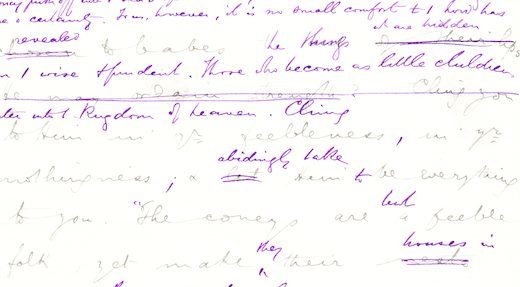 Giveaway Rules: You may only enter the draw once. Simply fill out your name and email address to enter the draw. As soon as the winners have been chosen, all names and addresses will be immediately and permanently erased. Winners will be notified by email. The giveaway closes Thursday at noon.

Note: If you are reading via RSS, you’ll need to click through to see the form.