You are familiar with the name John Newton, I am sure, and with the broad strokes of his life–how he went from captaining a slave trading ship to becoming a Christian and composing the great hymn “Amazing Grace.” What fewer people know about is his 40 years of pastoral ministry. Newton the pastor is the subject of Tony Reinke’s new book Newton on the Christian Life: To Live Is Christ. I recently asked Tony to tell us why he wrote this book and what we can expect to gain by reading it.

Judging by the title, this sounds like it could be a book that applies only to really smart people. Is it a book that ordinary Christians should read? Why?

John Newton was a practical man, so I aimed to write a practical book. In the words of one biographer, Newton was a man of utility — he had zero patience with pie-in the-sky theory and speculation. He helped ordinary Christians navigate the challenges of their busy lives, and I hope this book does the same. 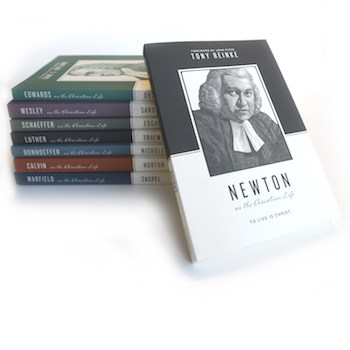 Newton is proof that the deeper we are willing to go into the mess and the hurt of this world to help people, the more we move away from detached, cerebral theology and toward hands-on, real-world pastoral care. And this was his world, as noted historian Bruce Hindmarsh put it so well in an interview, “Pre-modern life was pre-analgesic, pre-antiseptic, and pre-anesthetic. People hurt all the time.” It was into this relentless physical pain that God raised up Newton to serve as a spiritual cardiologist.

So don’t let the wig on Newton’s head undermine his value for our generation. Bible counselor Ed Welch recently said that in reading my book he felt pastored by John Newton, and this is exactly what I hope every reader experiences — a personal encounter with one of the church’s greatest ministers, who in turn helps us to commune with the living God.

So it’s not quite a biography, right? If not, what is it?

Right, my book is not a biography (I certainly could not improve on Jonathan Aitken’s work). Newton’s life was formed by a few monumental events, and those events shaped all of his instruction on the Christian life. So I recount key anecdotes and biographical highlights in order to show how those events illuminate his broader pastoral care.

I call my work “pastoral synthesis.” I want us to be pastored by Newton, and to this end I started by gathering together all of Newton’s many published letters — about 1,000 of them in various collections from over the centuries (and many of them preserved in old, rare, and fragile volumes in libraries around the world).

What I’ve found is that my generation (and younger) are unlikely to read old letters, even those by Newton. To serve the church, we need willing researchers to volunteer for the heavy work of collecting all the letters, identifying Newton’s key answers to the perennial questions of the Christian life, and then developing all that into a guided tour that allows the unique voice of Newton to frequently emerge. I was honored when Justin Taylor and Steve Nichols nominated me for the task and invited me to publish in their incredible series (Theologians on the Christian Life).

If you had to distill all of Newton’s counsel to a central point, what would that be?

To live is Christ — this is my subtitle and I’m convinced this is the core of all Newton’s pastoral counsel. Newton’s heart and mind was engrossed by the person of Christ.

Newton’s wicked heart was delivered, not merely by atonement, but by a sovereign Atoner. What I find most striking is the eagerness of Newton to employ a great number of names for Christ throughout his ministry — Shepherd, Husband, Prophet, Priest, King, and many others, including his favorite theologically loaded designation of all, Friend. Each name personifies a theological conviction and keeps the focus on the person of Christ.

Newton was a realist and a man of utility, but he was no pragmatist — his methods of Christian maturity are driven by splendor. Novelist Mark Helprin once wrote, “more is to be known and apprehended from the beauty of a face than in delving, no matter how deep, simply into how things work, no matter how marvelous that may be.” This could be an epigraph chiseled on Newton’s legacy.

Newton presses us through the theological categories of redemption in order to gaze upon the beautiful face of Christ. We are all plagued by sin, and we are all in need of maturity and further growth. Newton knew that when we fix our gaze on the glory of Jesus Christ, we find the horsepower to drive personal change (2 Cor. 3:18; 4:6).

It is marvelous to watch one pastor apply this principle, through more than 40 years of faithful letter-writing, to a broad swath of practical situations faced in the Christian life.

What do you think Newton might say to us, social media savvy Christians, today?

That is a really great question. What Newton has to say about writing in this digital age could become a short book alone, but I’ll focus on two points.

First, master innovative platforms. Newton was on the leading edge of social media. Providentially, God placed Newton in a historical time when the post office improved dramatically in efficiency, affordability, and dependability. Simultaneously, the culture in which Newton lived was embracing a more flexible, informal, and conversational style of written English. With these factors in place, letter writing exploded in popularity and substance. Letters were often intended to be read aloud to a family, to an entire household, and even among whole networks of people. In fact, Newton’s first attempt at his autobiography was written in a series of letters. This was his world. Newton’s letters are less like private emails and more like eighteenth-century blog posts. He jumped on the trend and mastered the medium.

Second, in the platforms you choose, write to persuade eternal souls. Most writers are content with bare self-expression. I suspect few of us write Tweets from a sense of calling, and Newton would call us to reconsider our method and motivation. If God has given you the skill and driving ambition to write, you should hone that skill to impact readers on whatever platform you use. Has God called you to write Tweets, Facebook updates, or online articles? If so, embrace the calling, pray for wisdom, engage social media to influence and change others, and work hard to sharpen your words to pierce hearts. Writing for the heart is arduous labor, and it requires years of prayerful practice.

How did writing and preparing this book change you? How did Newton mentor you through his writing?

As a writer, the book taught me patience. I like to write books very slowly, but this book required an even slower gear to organize and synthesize those letters — which are fragments of half a conversation. Like eavesdropping on someone’s phone conversation, you have to read between the lines to get the flavor of what the other person is saying, and then attempt to build those conversations into a unified and comprehensive pastoral agenda.

Personally, Newton mentored me to keep two eyes focused on the beauty of Jesus Christ. I pray this upward focus will be the permanent takeaway from this project for the rest of my life. Keeping focused on Christ sounds simple, but it’s not. This is the greatest challenge of the Christian life, as Newton reiterates over and over.

Surprisingly, I found the writing process intimidating. There was a point in the long research phase where I needed to begin writing, but couldn’t. I was seized by an anxiety that built over time, a lingering question that grew into a loud internal objection: Would readers really be captivated by a book that returns, over and over again, to the glory of Christ?

I felt like a jet, full of fuel, but stalled on the tarmac. In the frustration of delay, I bumped into a sentence from a sermon by Charles Spurgeon, who said, “I never recollect that a single book has been denounced by earnest Christians because it spoke too highly of Christ, and made him too prominent.”

In a moment, my soul found refreshment, and my vision for the book took wings. I printed the sentence out, pasted it to my computer monitor, opened a blank Word doc, and started writing Newton on the Christian Life.

If my book helps Christians delight in the soul-satisfying sufficiency of Jesus Christ, changing them from one degree of glory to the next, these precious years of researching and writing will have been well spent, and I think Newton’s legacy will have been well honored.

Newton on the Christian Life is available at Amazon and Westminster Books.