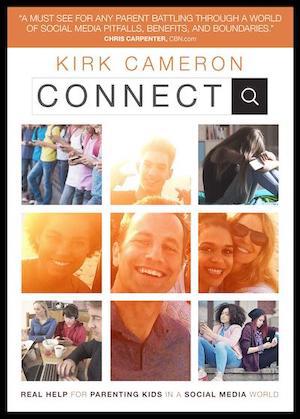 There’s no doubt the world has changed rapidly over the past 10 or 20 years. There’s no doubt that children are being raised in a very different world than their parents were. There’s no doubt that our children’s children will be raised in yet another world. The pace of technological advance has accelerated to such a speed that none of us can keep us. I don’t think there’s a parent out there who isn’t confused and concerned about what their children are experiencing. I don’t think there’s a parent out there who feels confidently equipped to raise their kids to live in this strange, new world.

Kirk Cameron has six children and feels that same sense of disquiet. He decided to spend some time exploring both those feelings of confusion and some possible solutions, then documented his journey in a film titled Connect. Through his presentation he offers “Real Help for Parenting Kids in a Social Media World,” (according to the subtitle). And he does a pretty good job of it.

Much of Cameron’s journey is guided by Dr. Kathy Koch, author of Screens and Teens. She helps him understand how new technologies in general and social media in particular have shaped the way our children see and understand the world. Neurologist Dr. Ian Armstrong helps him understand some of the neurological implications of living an always-on life while counselor Mark Gregston provides insight on new challenges to parenting. Several young people tell how their lives were impacted by growing up around all these new technologies.

Through these experts, Cameron assembles a brief but helpful and thoughtful look at some of the challenges parents today are grappling with. Those who watch the film will have a better sense of how their children are being raised not only alongside these new technologies, but actually through them. They’ll know danger signs to look for and receive a challenge about having meaningful conversations with their kids.

By way of critique, there may be a little too much longing for the good old days, as if our childhoods were the ideal. And sure, we tend to look back fondly on long summer days spent wandering the great outdoors. The reality is, though, that we wasted endless amounts of time and found all sorts of ways to get into trouble. The good old days were not quite as good as we remember them. Not only that, but they aren’t ever coming back. So we need to look deeper than that and learn what it means for our children to live good and meaningful lives in a world like this one. Thankfully, Cameron does that. Through his interviews with these experts he comes to the key understanding that we can’t throw away or wish away our technologies. To the contrary, we need to embrace them as a fact of life in this world and teach our children to use them well. A crucial component of parenting our children in this world is discipling them in their use of mobile phones, internet connections, and social media.

There is one aspect of the film I appreciated a lot and it was the conversation in which he was challenged to allow his children to make mistakes. The temptation for parents is to be so full of fear that we shelter our children from anything that could harm them to even the least degree. Cameron is challenged to give his children appropriate levels of freedom, then to allow them to make mistakes. The task of parents is then to help their children interpret the situation and to pick up the pieces. That’s not to say, of course, that we’ll allow our children to be irreparably harmed, but that we’ll allow them to experience the same kinds of bumps and bruises they got when they learned to crawl and walk and run. Just like we didn’t force them never to stand up, we shouldn’t force our children never to have a cell phone or never to get an Instagram account. This is a key insight many parents today miss. We’ve got to raise our kids to live in this world, not the last one.

Family and technology is an area I’ve put a lot of thought into, and I half expected to be disappointed by Connect. I’m glad to say though, that I was both helped and challenged by it. I think any parent will benefit from seeing it, considering it, and talking to their kids about it.